The Last Leg to California…

To catch up, my last part ended with Pippa, my 1966 Cherokee 180 sitting in Flagstaff Arizona waiting for a magneto repair and me in Palm Springs attending my planned conference having arrived after a 5 hour drive.

The conference was well attended and went very well. On Friday, the last day, I called to verify that Pippa would be available for pickup Saturday as I was updated in previous calls. It was then that I learned that the bearings received for the repair were incorrect and told they weren’t sure when the plane would be ready.

I asked if the original bearings were serviceable and was told that they didn’t know. At that point I asked to speak with the IA and was informed I WAS talking with him. It was then that I became very assertive. Now, for those that don’t know me well, I’m typically fairly laid back and try to achieve my goals in a more passive manner, but this time I must admit I lost it. It didn’t help when I found out that they had the parts shipped ground and had only received them the day before.

It was after a fairly heated exchange that I was told they’d call me back in an hour with a complete status. That call came in exactly 1 hour as promised and I was told the plane would be available for pickup the following day, complete with log entries.

So it was early Saturday that I left for my long drive back to Flagstaff to pick up Pippa. When I arrived I found Pippa on the ramp, oxygen bottle partially filled and needing gas. I then did a complete preflight, including mag check and satisfied with the results, went to the office to get topped off and pay the bill. There I was handed a bag with the replaced parts, boxes of new parts but no log entry. When I asked I was told that there were no other items left and the Mechanic wouldn’t be back until Monday. So it was that I decided, having completed my checks, to get the log entry later, pay the bill and leave.

On Saturday, June 1st at 2:07pm Mountain Time Pippa departed KFLG elevation 7,014 above sea level at 25 degrees Celsius – or in pilots terms a density altitude of almost 10,000 feet MSL! As you can imagine, performance was still sluggish requiring close to 15 minutes to climb 4000 feet to 11,000. At least with both magnetos performing well my ground speed was consistently above 100 knots and averaged closer to 115 knots. 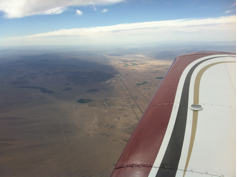 The next 3.5 hours were uneventful and I was only confused once by an amended clearance given by SOCAL (southern California) approach. But we straightened it out with minimal angst on either side. While the normal arrival procedures into John Wayne (KSNA) are detailed, I was cleared straight in to 19 Right. With my 430W programmed for the RNAV Y approached and severe clear, I touched down after a perfect approach.

It was then a taxi to the end of the ramp to Atlantic Aviation pickup of a rental car and a 15 minute drive to my home for the next week in Lake Forest. After 25 hours of flight time, 1.4 hours of ground time and one mechanical problem, my adventure was now half over, or at least I thought.

Upon arriving at my hotel, I found a message waiting for me from a pilot friend from my California office, to call him once I got settled in.

So after cleaning up and getting settled, I gave Joe a call. Joe told me he was watching my flight progress and wanted to hear all about the trip and suggested we fly to Catalina the following day to catch up. Even though I really wasn’t in the mood for flying Joe convinced me that a cross country flight wouldn’t be complete without, as he said, “having my plane touch its wheels in the water” on both coasts.

Joe was right so we made plans to meet the following morning around 10 for a flight to the island, even though I really wasn’t looking forward to it. After a good night’s sleep however my attitude changed and I was looking forward to a fun flight, until I checked the weather. The TAFSs were forecasting 600 foot ceilings until midafternoon. So after breakfast I made a call to share my disappointment, only to be convinced this is normal southern California weather and we should go anyway, with a guarantee it would be clear for our arrival at Catalina, as well as our flight back.

Realizing that the ceiling was well above the required height for an instrument approach into John Wayne, I reluctantly agreed knowing we’d have no problem returning if his guarantee was no good. We agreed to meet at the Atlantic FBO at 10:30. I had just completed my pre-flight, had the tanks topped off and was preparing a flight plan when Joe arrived. He informed me there was no need for a flight plan as we could arrange a clearance through the clouds with clearance delivery, something that wouldn’t have occurred to me.

Putting myself in Joe’s trust, I allowed him to work his clearance magic and as he predicted we were given a squawk code, altitude and heading to fly once off. Then it was a taxi to the run-up area, quick run up – proving the magnetos still worked and a cleared for takeoff on 19 Left and we were off. Entering the clouds at about 600 feet, we broke out at 1200 and it was a beautiful day. The clouds seemed to stretch most of the way to Catalina stopping about 5 miles from the island. Once again, just as Joe predicted. On this flight over, my trip felt different, but nothing I was concerned with. 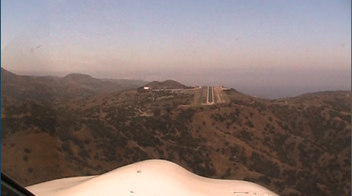 The remainder of the 23 mile flight was easy with only the landing as a potential obstacle. Joe warned me that there would be a downdraft on short final and we would be landing up hill and a hump in the middle of the runway would hide at least a third of the length once we were on the ground. He then went on to tell me of the accidents caused by pilots thinking the runway was shorter than expected with a cliff on the far side of the hump.

Once again, Joe was right and once I touched down, what appeared to be the end of the runway came at us fast. Even though we exited at the first taxiway, I would have been unnerved without the well-targeted advice. Once parked it was off to the restaurant for a bison burger, fries and an extra-large homemade chocolate chip cookie.

After lunch and a brief walk around the airport, I decided to check the trim. On the ground, the trim felt like it was binding so I pulled out a flashlight and inspected the tail cone as carefully as possible. Seeing what appeared to be some twigs in the cable mechanism I decided to remove the tail cone. Much to my surprise, a bird nest was being built on top of trim mechanism and some of the nest had worked its way into the trim mechanism. After 5-10 minutes of trim movement and stick removal, I had the trim cleaned up and working properly. Now it was just a matter of replacing the tailcone and all the screws.

Since I use a tail cover religiously, I assumed that the nest had been built while Pippa was out on the ramp in Flagstaff, the only time it had been without a cover – another present from the repair.

While I expected to return directly to John Wayne, Joe had a different idea. He thought it would be good for me to fly the Hollywood corridor. Since his recommendations had been good so far, I figured what the heck and agreed. From Catalina we flew directly to Long Beach where we picked up the corridor. From there it was only a matter of squawking the right code, staying at the right altitude and following the published route.

Joe had done it enough times that I decided to let him do all the radio work and tell me what heading to fly and what altitude. It all worked out perfectly as we flew directly over LAX, past the Hollywood sign, Griffin Observatory, around the Disney TFR and back to John Wayne. I’m glad I listened to him as it was a wonderful flight. Also, I was pleased to have someone who had done it before copilot the trip. Not something a newbie should try unassisted, especially in the very busy LAX airspace. Also, the weather cleared, just as Joe predicted.

So now my trip, ocean to ocean, was complete and I could start looking forward to my flight home.

Editor’s Note: Be sure to check back next Wednesday for Part 4 of 4 and the conclusion of the BIG trip!