Let me start this off by saying, owning a plane is great! Like a pet, it is always at the ready to take a trip, have an adventure or just get some attention with a quick wash. It helps make friends by providing an introduction to a new and welcoming set of folk, other plane owners, pilots and type club members, not to mention your soon to be best friend mechanics. 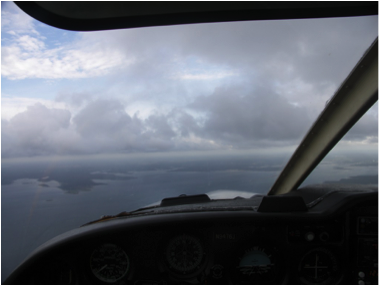 Clouds on the horizon, land ahead!

On Christmas Eve, 2005 I started what would become a holiday tradition. Carey, a good friend, and I decided to fly to Nantucket for a pre-Christmas breakfast of bacon, eggs and grits. The flight to KACK was uneventful to a deserted ramp with only one other airplane, a Cherokee 6, sitting in the cold.

Finishing our (soon to be) traditional holiday breakfast we headed out to Pippa, after first joking with the friendly FBO attendants about spending Christmas with them if Pippa failed to start. Once arriving at Pippa I did a quick once over, verifying the fuel levels, tires quality and overall readiness for the flight.

Once inside, I ran through the pre-start checklist, pushed the starter button only to have nothing happen, nothing. After a little diagnostics (looking at the starter gear through the opening in the cowl), I decided it was broken. Since there is no Cherokee checklist to diagnose a starter failure, my quick evaluation was all I could do.

The starter was no good…

I also remember an older (probably my age now) gentlemen who walked by suggesting if it were him, “I’d just hand prop it.” However when I asked him if he would, he said no and kept on walking. It was only at that point that I realized there is no maintenance on Nantucket, an amazing thing considering how many flights make it a destination.

Discussing my options with the FBO attendant, of which staying on the island was not one, I found out that the Cherokee 6 on the ramp was also having mechanical problems and a mechanic had flown out to get it running. Sprinting out to the Cherokee 6, I found that the mechanic agreed with my diagnosis and there was nothing that could be done, since there were no spare parts available.

Another view of the faulty starter…

Talking with the other pilot, I found out that he was based in Providence and my friend and I could hitch a ride back to Mansfield’s 1B9 if only he could get his plane started. Remember what I mentioned earlier about the power of planes to help make friends?

In preparation for a hopeful start, we tied down Pippa, installed the gust lock (a bungee cord) and put the pitot static cover on. The rest of Pippa’s foul weather protection was back in Mansfield in the trunk of my car.

Start the Cherokee 6 finally did and with us all boarded, me in the copilot seat, we departed Nantucket. Just a little about me, I’m a conservative flyer. When going to the islands, I take the chicken run. The Chicken to Nantucket for me and Pippa means flying at 5500 ft, high enough that I’m always within gliding distance to land, hanging a left at Martha’s Vineyard and starting descent at the eastern shore of the Vineyard.

Our flight to Mansfield was anything but a chicken run; 2000 feet direct. All this in a plane that just had maintenance work, albeit just a starting issue. I also noticed that the plane flew with the pilot side wing noticeably low, making me question (in my mind only) of the rigging and the owner’s maintenance philosophy. Being appreciative for the ride, I kept my thoughts to myself and the flight to 1B9 was successful.

After landing, the engine quit on the taxiway and we were towed to the ramp. At the owner’s request, I jump started the Cherokee 6, thanked him for the ride and watched him depart. It was then that I realized that jumping in an unknown airplane could be as risky as hitch hiking a car ride. 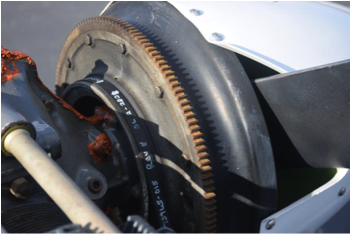 Cowl off to count the teeth…

Pippa’s repair took two additional flights; the first to pull the starter and count the teeth on the ring gear (Piper Lycoming O360 engines have two different teeth count and installing the wrong starter would cause another failure). I was able to do this work myself.

The following week the replacement starter was installed, inspected by my mechanic and Pippa was home after a two week vacation on Nantucket.

This was the start of a Christmas tradition for Carey and me – breakfast on Christmas Eve to celebrate our successful first time.