One of the really cool things that’s happened during the years I’ve been flying is the rapidly changing and constantly developing technology used in the cockpit. Whether that means big, moving-map GPS systems, glass panels or even the fact that many smart phones are now fully-functioning Electronic Flight Bags (EFB’s), we’ve seen a great deal of advancement when it comes to mixing aviation and computerized technology. 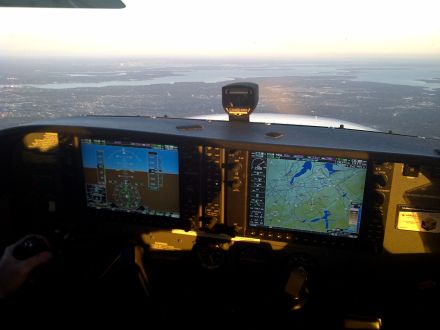 The information available to the pilot of a Technological Advanced Aircraft (TAA) is (almost) limitless, but only if the pilot knows how to access the information!

I remember the first time I flew with a G-1000 system, which was almost a decade ago now. It was in a new Cessna 172 Skyhawk that KING Aviation-Mansfield used to rent and provide for advanced (instrument & instrument instructor) training students. The first time I saw it, I thought it was really neat and I was anxious to get started learning all the knobs and buttons (all 128 of them), what there functions were and all the amazing information I had access to in the cockpit!

Then came the first time I flew it, for a day Visual Flight Rules (VFR) check out. It was about 30 minutes into the little more than one hour first G-1000 flight that I realized, you know what, this is just a fancy 172… I fly because I enjoy the view and I can go cool places in pretty good time. So the G-1000 system didn’t really do a whole lot for me personally. But I knew many other pilots would be enamored by the technology and want to fly, “nothing but the best.” So I got checked out in the plane and continued to fly it when students requested it for checkouts, advanced training and occasionally with private students who wanted to see what it was all about.

Just because the glass cockpit in a 172 didn’t do much for me, I knew it was important to others and I wanted to be able to provide the best representation of the system for them, so I learned the systems… It really is incredible what the system is capable of, there are a great deal of references and books that will teach you everything you need to know about fully utilizing a glass panel display in a general aviation cockpit. But that is not what this post is about, this is about the 3 big things you should keep in mind when making the switch from steam gauges to the glass cockpit!

The glass-cockpit systems available today are nothing short of awesome! Don’t get me wrong… While in actual conditions, the glass displays allows a pilot to replace their senses with a plethora of situational awareness information. This makes a pilot sharp and allows us to stay in control of the situation.

The big question though is, what about during day visual flight conditions? Many pilots struggle with having the ability to look out the window in this situation… Even when the weather is “clear and a billion,” with those shiny, bright information-packed glass displays at their end of their noses, many pilots are unable to look away.

Even the best traffic avoidance system may not be aware of the Piper Cub without an electrical system aimlessly drifting with the wind that the heads-down screen-glued pilot will not see. It is critically important for pilots to realize there is a difference between flying a glass cockpit-equipped aircraft in visual conditions as opposed to flying one in instrument conditions.

I remember cruising along with my former student Peter one day in his recently purchased Piper Challenger. I was scanning the panel as he was flying along in our pursuit of an airport restaurant meal… When I saw the autopilot, I remarked as much, “Looks like you have an auto-pilot.”

Peter quickly responded with something along the lines of, there is one but I haven’t used it yet… He quickly added that he’d like for us to review the manuals together before we try using it and that he’d like to have a CFI (me) in the plane the first time he did try it. As his former primary instructor, this display of outstanding airmanship in the form of sound aeronautical decision making brought a proud smile to my face.

Peter could have started to “try” and “test” the system by attempting to engage the autopilot, an action which I would have quickly objected to, not having used the type of system before, but he did not, he made the RIGHT decision. This was in a “steam-gauge” aircraft, but the lesson transfers over to glass cockpits very nicely.

Launching into the sky for a flight and trying to operate the hundreds of buttons/switches/selections for the first time while in flight is a poor choice… It is much more intelligent to try these things on the ground, when you are able to focus on the button-ology as opposed to putting flying the aircraft on the back-burner. There are a wire array of “power-packs” that are available which you can use to run the electronics on the ground (to figure out specific actions) as opposed to draining the aircraft’s battery while trying to learn the menus and buttons.

Let’s approach this concept from a non-flying angle for a second… You want to make a smoothie; you have all the mixings and a blender. You plug the blender in and load up the jar, push the start button but nothing happens. Turns out you have all the ingredients and tools but you can’t work the blender… A quick look at the box for your new blender shows you the lid must be fully secured before the blender will engage. You hit the button on the top of the lid, try the start button again and bingo, bango, bongo… In a few short minutes you are enjoying your morning smoothie.

What does this have to do with flying? Well think about the example with an aviation application, you’re flying along and want to know the distance to an airport (smoothie). You have the G-1000 system to do this (blender). But you’re not quite sure how to use the menus to find the distance to an airport that isn’t one of the closest to your present position. A quick look at the manual or a quick reference guide can provide this information… The idea is that the system may be capable of doing thousands of things. But if you as the pilot only know how to do two dozen operations with the system, then in effect the system only knows how to do two dozen things… At least until Apple puts Siri into the glass panel and we can simply ask our airplanes all of these questions instead of mashing buttons…

My advice is that if you have the opportunity to give a glass cockpit aircraft a try, definitely pursue it. The technology is amazing and there is a ton of great information that is available to glass-cockpit flyers that is not available to the pilots of steam-gauge equipped aircraft, at least not as readily. If nothing else, the experience will prepare you for more flying success by learning new systems and advancing your piloting abilities.