The first powered aircraft flight was not all that long ago in the perspective of human history. December 17, 1903 was just over 117 years ago. When you compare that to Michelangelo completing the painting of the Sistine Chapel in 1512, we’re talking about a very recent development here. Yet due to the rapid advances in technology over the last century, a side-by-side of a Gulfstream 650 and the Wright Flyer may have you thinking that multiple centuries of human ingenuity and effort went into the evolution of powered air travel.

Even though it’s only been a little more than 117 years since the first powered flight the rich history of aviation is all around us. At the Barnstable Municipal Airport, where I spend my weekdays, we trace our history back to the late 1920’s when a farm was converted to an airport. Now as a regional transportation hub, JetBlue arrives daily during season with service to New York City for the greater Cape Cod region.

This leads me to my recent tale, of spending a mid-summer afternoon walking around a Cape Cod grave yard. I have no idea how the whole thing played out, as the backstory still seems a bit “sketchy”. But the takeaway is there is incredible history all around each of us, maybe even right under our noses.

One afternoon my fiancee, Emily, a Purdue University graduate mentioned that there was a cemetery she wanted to visit. The cemetery is not far from our home, along a main road in Barnstable, MA. The reason she wanted to visit the graveyard was because there was a fellow Purdue University graduate who had flown with he Wright Brothers buried in the cemetery. She shared a link to the story online (read more HERE) and after reading it I was mesmerized that one of the very early air show pilots in the history of aviation, who was trained to fly by the Wright Brothers, was buried right down the road… How cool is that?!?

We arrived to the Lothrop Hill Cemetery and parked in the rear, far away from the road. We took our time canvassing the burial ground and even found the grave of Thomas Hinckley, the final governor of Plymouth Colony. After a while we found a small, section with decorative shrubbery, set aside from the balance of graves. Here in this tranquil setting we found the grave of James Clifford Turpin. 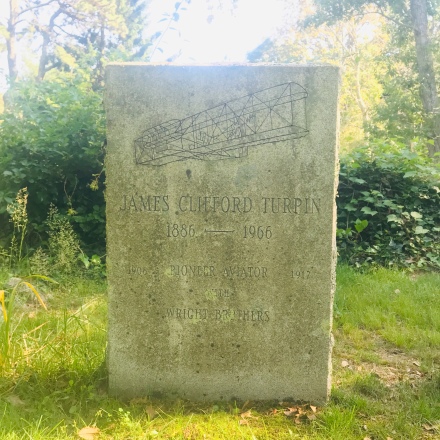 This man who only flew a few years from 1908 to 1912 in the very early age of aviation is a true aeronautical pioneer. Trained by the Wring Brothers and having performed in their atrial demonstrations, he was a very accomplished pilot in the dawn of the aviation age. When a close friend was lost in a crash while performing in one of their aerial demonstrations James hung up his wings and never flew again. He went on to have a very successful and happy life. The story really is remarkable and it’s worth a read.

Take a look around, you never know when something incredible from the history of aviation might be right in your own backyard!

One thought on “Aviation history in my backyard…”