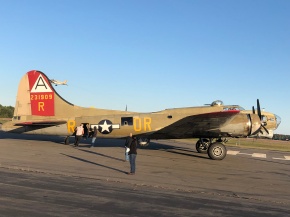 On September 19th, 2019, I took a ride on Nine-O-Nine the World War II B-17 that was part of the Collings Foundation Aircraft Collection.  Nine-O-Nine was visiting Plymouth Airport for a few days as part of its tour schedule.  I booked a flight online a few weeks before that.  I had also booked a flight one year before when it was scheduled to visit Norwood Airport, but it missed the Norwood stop due to an engine issue.  I was very excited to fly in a B-17, the same model that my father co-piloted through 30 missions in Europe during World War II in late 1944.

The nine other passengers and I received a briefing from the Flight Engineer prior to boarding and were our assigned seats.  Two sitting backwards on the floor behind the pilot and co-pilot.  Three in the radio room, and five on the floor in the fuselage.  We sat on cushions on the floor and leaned against a cushion that was attached to the inside of the fuselage.  We boarded via the back door, without the benefit of the ladder.  It was either grab the inside top of the doorframe and hop in, or sit backwards in the door frame and wiggle inside.  I elected to hop up and in, fortunately I did not embarrass myself.

Once inside, we sat down and buckled up, my seat was in the fuselage.  We taxied down to Runway 06, did a run-up and took off.  Sitting on the floor, we could only see the sky through the waist gunner windows.  I kept thinking of the 20 something year old flight crews who took off for a 6-8 hour round trip in these airplanes wondering if they would make it back to base or be shot down enroute.  We quickly climbed to about 800 feet or so and the flight engineer gave the ok to unbuckle and walk around the airplane.

Standing in the fuselage I took a look out the waist gunner’s windows, then made my way to the radio room where the hatch was removed and we had a view out of the top of the airplane.  I took a good grip on my cell phone for some photos of the view out the top hatch.  It was then on through the bomb bay to the area behind the cockpit, and then a crawl down to the bombardier and navigator positions in the nose.

The flight lasted about 25 minutes.  Plenty of time to walk around the airplane.  The Flight Engineer gave the order to find a seat and buckle up.  Landing was uneventful and we taxied back to the FBO.

I started writing this blog on September 20th, the day after I took a ride in Nine-O-Nines.  My thrill of riding in a B-17 was dashed when less than two weeks later, that airplane had a mechanical problem and crashed trying to return to land at Bradley Airport in Connecticut.  There were 7 fatalities and 6 survivors.  This news had a strong impact on me.  It is so sad that these people were probably as excited as me to ride in a B-17 and then to have it end so tragically.