Two red, two white and you’re right on track. In fairness this is really two white, one red with a “pink”, we were just settling into the normal approach path when I snapped this image…

Next time you go flying and you’re landing on a runway equipped with a Precision Approach Path Indicator (PAPI), make your approach to follow the PAPI. Once you’re established on the final approach leg of the traffic pattern take a look around and notice the clearance from any obstructions. The PAPI is set up to provide visual approach information to pilots, including obstacle clearance (ensure there are no A/FD notes or NOTAMs to the contrary). 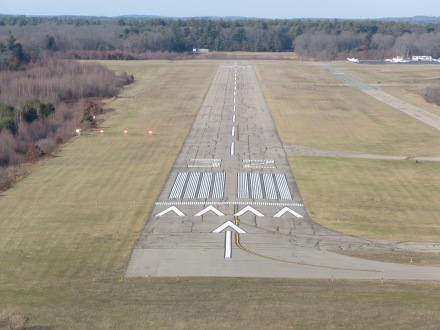 In this image our aircraft was just below the normal approach path, as indicated by the three red, one white configuration in the PAPI to the left of the runway.

Typically I teach students to ignore the PAPIs (and formerly VASIs, which are becoming less common these days) because these guidance facilities set you up to land at the touchdown zone on the runway, 1000′ down the runway. Private pilots typically aim for the runway numbers, round out, flare and touch down around the second runway stripe. So I teach students to ignore the PAPI and fly a smooth consistent approach to a touch down at their intended point of landing. However, at night when obstructions are hidden by the ambient darkness, PAPIs and the remaining VASIs provide critical safety information and ensure a nice cushion of protected air below your aircraft. 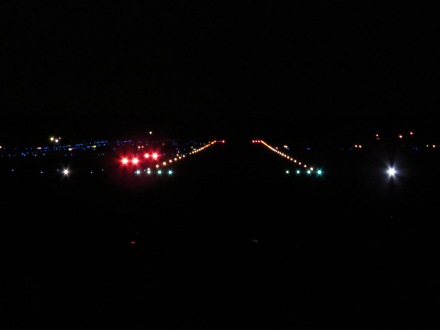 This runway is served by a VASI (the two sets of red lights to the left of the runway). You do not want to see this while flying at night, the “red over red” tells you you’re too low! “Red over white and you’re alright”, that’s what you’re looking for… I actually took this picture from a hill at the approach end of Runway 32 at EWB prior to its recent reconstruction where it was reduced from 150′ wide to 75′ wide.

Once you’ve flown the approach during the day and observed the obstacle clearance afforded by an “on glide slope” approach based on PAPI guidance you can fly confidently at night and follow the PAPI, two white, two red and know you’ll be clear of any obstacles. Since you can see PAPI lights when roughly aligned with the final approach course for a runway almost twenty miles out, you can fly comfortably in the dark, knowing your approach is safe in the darkness.