An early fall Monday at the airport went from a good day at work to the opportunity of a lifetime, a flight in a B-24 Liberator. Just how rare is flying in a B-24? As it turns out, pretty rare when you consider that approximately 18,500 were built in support of the allies in World War II and only 2 are presently maintained in airworthy condition today! When the opportunity came for a flight, I certainly wasn’t going to say no, and I’m glad I went for the flight – it was more meaningful than I expected…

On Monday, September 24th we welcomed the Collings Foundation Wings of Freedom Tour to the Barnstable Municipal Airport (HYA). With a number of media members on hand, I too watched from the East Ramp at HYA as a B-25 Mitchell made an over head pass then landed and taxied in for parking. Then the P-51 Mustang did the same, including a right break to downwind for a landing on Runway 6. An added attraction for the seaplane-lover-in-me was the beautiful Grumman Goose support aircraft that also arrived.

Last but certainly not least, the four boisterous 1200 horsepower Pratt & Whitney R-1830-65 engines roared overhead as the B-24J Liberator, serial number 44-44052, presently painted as “Witchcraft,” approached the airport. The mammoth aircraft with a wingspan of 100 feet and a length of 67 feet, 7 & 5/8 inches was all the more impressive as it landed and taxied in for parking, easily dwarfing the other war bird aircraft on the ramp.

The story of this particular B-24J, the only remaining fully restored and flying Consolidated B-24J Liberator is quite an interesting tale. The aircraft was built in August 1944 at the Consolidated Aircraft Company’s factory in Fort Worth, Texas. Delivered to the US Army Air Corps then transferred to the Royal Air Force in October of 1944. The aircraft saw combat in the Pacific theater of World War II as KH191 flying under the British flag. The aircraft’s operations included anti-shipping, bombing and re-supply.

When World War II concluded the aircraft was abandoned by the Royal Air Force in Kanpur, India amongst a bomber graveyard. The plane was left for scrap, never to be flown again, or so it was thought… However, as fate would have it, in 1948 the Indian Air Force restored a number of B-24 aircraft including serial number 44-44052. The 36 restored B-24 aircraft remained operational and in service until 1968!

Following this stint as a member of the Indian Air Force fleet, the aircraft again sat dormant in India for 13 years until it was purchased by a British aircraft collector Doug Arnold in 1981. After being disassembled and shipped to England the aircraft was sold again in 1984 to Dr. Robert Collings. This time the aircraft was shipped via boat (the trip a few years earlier to England was aboard an aircraft) to Boston and ultimately to the Collings’ location in Stow, MA.

The “Witchcraft” nod brings an entirely new twist to the story tying in another incredible story from World War II. As the Collings Foundation explains, “The History of “Witchcraft” is a story that legends are made from.” The original “Witchcraft” was a B-24 built in 1944 by Ford at the Willow Run plant in Michigan. During World War II while flying in the European theater, “Witchcraft” logged more than 130 combat missions with various crews. Throughout all of these missions, there was never a single injury or fatality amongst any of the “Witchcraft” crew members. A truly remarkable and incredible feat!

Back to my Monday, September 24th at the Barnstable Municipal Airport… The grey skies lightened up as the war birds approached and the public was soon glued to the airport fence as the aircraft arrived and parked on the East Ramp. Once the aircraft were in place the gates were opened and members of the public funneled in for their chance to experience living history first hand at the airport. We added the attraction of some airport equipment for a touch-a-truck component for the children too.

The B-24 made three flights on the 24th. Providing passengers the ability to experience flight in the only remaining, flying combat experienced B-24 from World War II. As the day wore on the opportunity for a flight presented itself at the very last minute. It was almost 6pm on a crisp New England fall day and I was given a sticker as passenger #3 of 6 for the flight. My seat was against the aft bulkhead of the bomb bay, seated backwards. I was immediately above the retractable ball turret gunner position. a truly unique component of the aircraft!

The crisp New England fall air was quite cool coming in through the openings around the ball turret. These openings provided a unique view, I was able to watch the runway centerline stripes pass by underneath at we accelerated on the takeoff roll.

Once seated inside, the two engines on the left side roared to life and very shortly thereafter we were taxing for a Runway 6 departure. I could see the painted markings on the pavement change from yellow to white as we taxied onto Runway 6, looking through the opening below my feet around the ball turret. The B-24 lumbered down the runway and then slowly climbed into the air. In all of my flying this was likely the most unique vantage point I have ever had. I had watched the two prior B-24 departures during the afternoon and watched as the aircraft made a deliberate, shallow, consistent yet effective climb out. 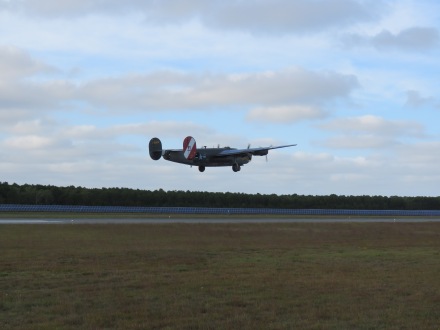 However, on my flight, sitting backwards, with a view straight back all the way out the windows of the tail gunner position it looked as if the pilot had yanked the controls back and pointed the nose skyward. A sensation that was likely the result of seeing things differently, not actually based on what was happening. We made the same deliberate and effective climb to altitude then cruised over Sandy Neck Beach and over Cape Cod Bay along the shore North towards Plymouth.

Seated backwards against the aft bulkhead of the bomb bay, provided a unique view straight back though the tail gunner position.

Once leveled off a bell rang alerting us that we could “move about the cabin.” Careful to hang on appropriately, I made my way back to the waist gunners positions to enjoy the view from the large windows (really openings as there were no window). Thanks to the time of day and cloud cover we were treated to a beautiful sunset off the left wing as we headed roughly North along the coast. The Cape Cod Canal zipped by under us and we continued towards Plymouth, MA.

An amazing “wing-view” sunset over the white cliffs of Plymouth from a B-24 Liberator!

Next I crawled my way to the aft tail gunner position, even in a large aircraft the size of a B-24, I’m sure the pilots felt the shift in center of gravity as I reached the tail… The tail position was very cramped, not an ideal spot for someone of my size. After a few pictures and seeing all there was to see, I returned to the waist gunner openings for a few more pictures as we made the turn around over Plymouth and began heading back to Hyannis. After a quick look at the bomb bays, it was time to return to our seats and “buckle up.”

Once in the seat, I couldn’t help but enjoy the smooth ride as we made an approach to Runway 6 at HYA. The vantage point watching backwards out of small viewing areas makes for an interesting sensation on short final… I again watched through the opening around the ball turret to predict touchdown, the pilots did a great job, with a smooth flight in the living legend. The flight was less than half an hour, but we covered a lot of ground and it was incredible to have been flying in one of the only two remaining airworthy B-24 aircraft in the world, and the only one with World War II combat experience.

The B-24 was a monstrous aircraft on the ramp!

As we landed and taxied back to the East Ramp at HYA, the scope of what I was experiencing hit me. There were thousands of these aircraft built and operated in World War II. So many times highly qualified flight crews took to the skies in these very aircraft to protect freedom and America around the world and so many thousands of times the planes never made it back or made it back badly damaged with various crew members injured or killed. While we took a casual sunset cruise around Massachusetts Bay that evening, what this flight symbolized was so much more. It really is incredible to think of the impact that the B-24 bomber had on World War II.

The B-24 was operated by all branches of the United States military in World War II and was a mainstay in the European theater and was also effective in the Pacific theater as a result of the fuel range provided by the aircraft’s design. To this day the B-24 is the most produced American military aircraft ever, thanks to the hard work and dedication of so many individuals who participated in the war efforts on the home front during World War II.

There are presently only two flying, airworthy B-24 aircraft in the World, making it one of the rarest surviving aircraft of World War II. World War II began in 1939 and lasted until 1945, which means we’re approaching 80 years since the start of the war. It is worth wondering how much longer the remaining World War II flying fleet will continue to fly the skies. Eventually, as we’re seeing with the Greatest Generation itself, there won’t be any members left…

I highly recommend that you seek out the opportunity to experience the living history that is the Collings Foundation Wings of Freedom Tour. They travel the country to bring this history to our collective and individual backyards through our local airports. With this, our airports become our conduit to experience history, a unique mission for an airport. Even if you don’t get the opportunity to go for a flight in the aircraft, I highly recommend that you try to experience these aircraft. They truly are something special and provide a great connection to our country’s rich history.