Everyone has a bucket list, a list of things they’d like to do, witness or experience before the end. Admittedly, I think some folks overdo it with the bucket list concept… I’m of the belief that it should be a very small group of things, that are extremely special as opposed to a large collection. This is open for interpretation of course, and there is no wrong answer, a bucket list is your very own thing.

While I don’t use the “bucket list” term very often, I’ve recently added something to my list. I have decided to visit all 6 of the original Mercury space capsules that America’s first astronauts flew into space during the early 1960s. I’ve always been a big fan of the history of NASA, especially the Mercury program.

Friendship 7 on display at the Smithsonian Air & Space Museum in Washington D.C.

Friendship 7, the Mercury capsule of John Glenn, the first American an astronaut to orbit the earth is on permanent display at the Smithsonian Air & Space Museum in Washington DC. Over the course of my childhood and teenage years I was lucky enough to visit the museum and see Friendship 7 on multiple occasions. But that left five (5) more capsules. Extremely rare, these very valuable pieces of national history are scattered across the country.

At age 13, visiting Friendship 7 at the Smithsonian Air & Space Museum in Washington DC. The t-shrit was from Wagner Airways, the flight school where I had started taking flight lessons just the month before at the Taunton Municipal Airport (KTAN).

The first step was to find where the capsules are located… In order of their Mercury missions:

To date I have visited three of the six Mercury capsules, so I’m half way to checking “Mission Mercury” off my bucket list!

On Saturday, June 10th my fiancée Emily and I took a ride over to the Kennedy Space Center in Florida to spend the day experiencing all NASA, all day. We are both big fans of the early space program missions and as a Purdue Alumni, Emily’s school’s history is woven into the history of space travel. Walking through the Astronaut Hall of Fame it was more of a who’s who of Purdue University alumni than any other school, that’s for sure!

Sigma 7 on display at the Kennedy Space Center in Florida.

During the visit, one display took me by surprise, it was of the mercury program which showed a Mercury Redstone rocket hanging from the rafters with the capsule Sigma 7 atop the rocket. History buffs will remember that Wally’s orbital mission was launched with an Atlas rocket as opposed to a Redstone. However, these are purely details, it was awesome to see the capsule and notch one of the Mercury capsules off my list!

While visiting my family for the Christmas holiday, Emily and I planned to depart for Florida from Boston as opposed to Providence, Rhode Island, where we arrived for the visit. The goal was to have a couple of days in the city to explore before leaving since Emily hadn’t spent any time in Boston other than our quick arrival and departure during a visit in May 2017. Aside from sub-artic temperatures during our time in the city, it was a great adventure.

Freedom 7 on display at the JFK Presidential Library in Boston, Massachusetts.

On the way into the city we stopped at the Presidential Library & Museum of JFK. Twenty four hours before our visit I had no idea that the Freedom 7 capsule was on display at the museum. It had been many, many years since my father took me to the JFK Library, so Emily and I decided to stop in and check it out. While doing some research the night before I discovered that Freedom 7 was on display, at that point it became a necessity to stop as opposed to a preference. Sure enough one of the prominent displays inside the museum centered on the space program which included Freedom 7, thus allowing me to check another capsule off my list!

My next capsule visit came during a quick visit for a few days to the Washington D.C. area in late January 2018. On the morning of my departure back to Florida from the Reagan National Airport (DCA), I made time to stop in and visit the Smithsonian Air & Space Museum. As I mentioned previously, I have visited this museum a number of times on family visits and during annual trips as part of an Air Force Junior ROTC program I was involved with in high school. But, each and every time, this place is special and it had been more than a decade since my last visit to Washington D.C. 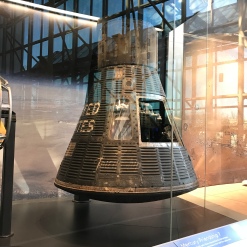 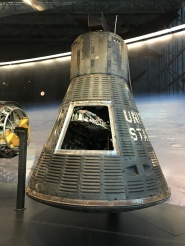 I expected a line to get through the museum security so I arrived fifteen (15) minutes before the doors opened so that I wouldn’t have to wait too long. As soon as the doors opened at 10am I was one of the first visitors through and a quick right turn after the entry and there it was… Friendship 7! John Glenn is my favorite astronaut, as I’ve written on many occasions, and visiting Friendship 7 is always special. Since my last visit the display has been changed, previously the capsule sat on a perch alone. Now it is incased with the Gemini IV capsule (from which Ed White made the first American space walk). I took a number of pictures, walked the museum to see John Glenn’s Mercury space suit and a variety of other artifacts and famous aircraft, but my favorite part of the Air & Space Museum will always be Friendship 7! Even thought I’d visited the capsule many times before, we’ll use this visit as my official check off on the list!

As of today, that leaves three (3) capsules remaining to visit…

Liberty Bell 7, which for many years sat on the floor of the Atlantic Ocean following an unsuccessful capsule recovery at the end of Gus Grissom’s successful suborbital Mercury mission. On the 30th anniversary of Apollo 11’s moon landing, July 20th, 1999, Liberty Bell 7 was raised from the ocean floor and loaded onto a recovery ship. Presently on display in Kansas, which seems like an odd location (in my opinion), even raised from the bottom of the ocean this capsule may still be the most difficult and out of the way to visit. However, Grissom is a Purdue alumni, so I’m sure Emily will be okay with making the adventure someday.

Aurora 7, is on display at the Museum of Science and Industry in Chicago, Illinois. Emily and I are overdue for a visit to her parents in Indiana. Maybe we’ll be able to make a quick trip up to Chicago to visit Aurora 7 during 2018, we’ll see…

As of now I’m half way through the list and it may take many more years to complete, but I’m committed to visiting all of the Mercury capsules someday, it’s just a matter of time… What’s on your bucket list?