On December 30th, 2013 I launched MTElia’s Flying Blog, I had no idea it would turn into ReviewBeforeFlight as it is today. Having been viewed from more than 75 countries around the world, with more than 10,000 page views in just under 10 months I am truly grateful… As we were approaching 9K views, I knew I wanted to do something special for 10K, I just wasn’t sure what. Something fitting to the passion for aviation we try to encourage here at RBF! 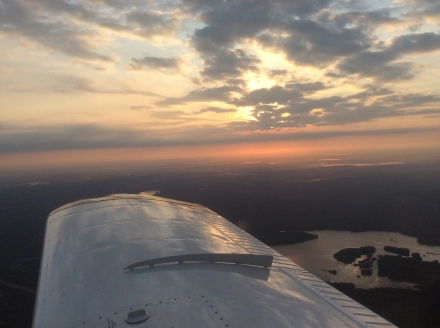 A beautiful sunrise while flying up to Fitchburg for breakfast!

As fate would have it, when I woke up at 5am on Saturday, September 20th I checked the page views and I knew that day we’d hit the big 10K! I was up early on a Saturday to drive up to 1B9 (Mansfield Municipal Airport) to meet Peter Ofner and fly out for breakfast. I called the weather briefer while on the highway and he confirmed what I suspected. It was a chilly morning so some patchy areas of 5ish miles of visibility would burn off as the sun rose and there was a great day on tap! The plan was to fly out for breakfast and be back by 9am for the annual 1B9 Fly-In/Touch-A-Truck community event. 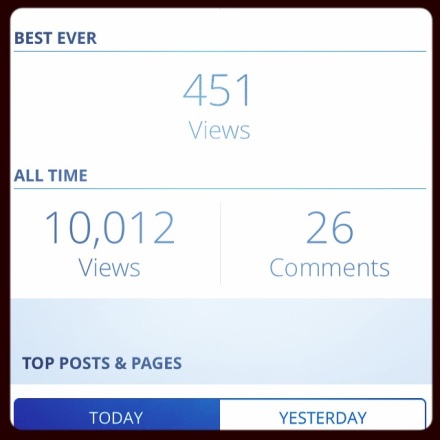 I took this screenshot of the WordPress app for ReviewBeforeFlight after dinner on Saturday, September 20th, 2014… We did it, 10K views!

Having flown around Massachusetts for the past 14+ years there aren’t too many airport restaurants I haven’t visited but Gene Collette’s at Fitchburg Airport (KFIT) was one… KFIT is a nice airport nestled just outside the 495 loop of Boston, but not too far west and right on the north side of Route 2… The flight was smooth as silk from 1B9 over the ‘Snoopy Lake’ (picture/explanation below) then a quick jaunt around a restricted area with a 45-degree entry into the downwind for Runway 32. 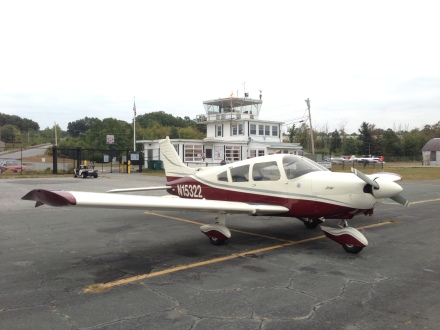 The Challenger parked in front of the Fitchburg Airport administration building!

The FBO building at KFIT is due for demolition to make room for a brand new airport administration building, compliments of MassDOT Aeronautics funding. I’m not sure when that is scheduled to happen, likely soon, and I’d encourage you to make the trek to KFIT before that time! The old military airfield tower-style structure sits front and center of the ramp and simply put, it just looks like an old-fashioned town airport building. It just fits and this aviation enthusiast will be sad to see the design go, though as an airport manager, I know they likely NEED a new building to modernize what they do and how they do it…

When Peter and I walked into the FBO the window/counter for the flight school was to the right and the tables for the restaurant (all one large room) was to the right. Instantly I thought, gee this would be a great place to be a flight instructor. I just imaged my books, laptop and flight bag spread on one of the tables, which would serve as my office as a locally-based CFI.

Peter and I took a seat with a great view of the ramp and were immersed in aviation… The décor of the restaurant is incredible; I have never been to a place as aviation themed, and I’ve attended Oshkosh Airventure… So that’s saying something! 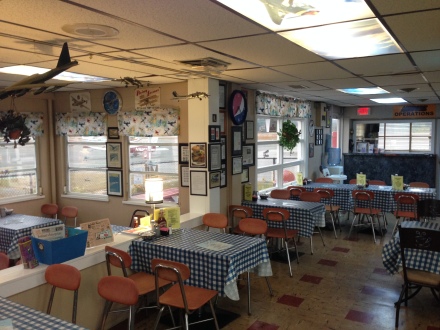 The atmosphere of Gene’s, and the Fitchburg Airport in general, is perfect…

This isn’t a restaurant review, (I encouraged Mitch to fly up, try it out and write one though) but I would be remiss to not mention how great the food was. The first breakfast special on the daily menu was perfect for me 2 eggs over easy, 2 French toast, bacon (real bacon!) and home fries with an ice tea was a perfect fly-in meal. The food was served without delay but not too soon, giving Peter and I just enough time to enjoy the aviation atmosphere. Over breakfast we talked about the flight up, my landing and the cool design of the building and restaurant inside it. 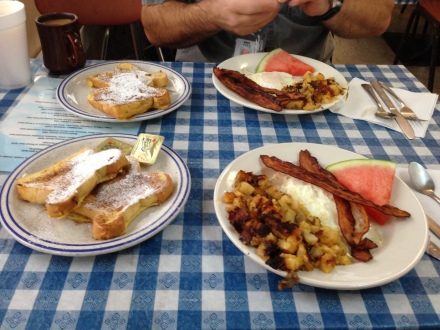 The food at Gene’s is fantastic, and the slice of watermelon was a great and unexpected touch to top off the meal!

I really can’t express how much I recommend this place, even if you are coming from a ways away, it is definitely worth it! The restaurant at KFIT is open 7am-2pm daily for breakfast and lunch and it is worth the flight, with a 4500’ runway, plus a crosswind runway, KFIT is a great airport as well!

Since I flew us up to KFIT, Peter flew us back, retracing our course in reverse. Peter entered the upwind for Runway 14 at Mansfield (see Why you should AVOID the straight in approach! from 1/20/14 on RBF) and proceeded to make a great landing before we taxied back to the hangar and pushed the Challenger back into it’s cozy home.

The Mansfield airport was lively on this particular late summer day as it was airport weekend… The previous night (Friday 9/19) all three of the recent Red Sox World Series championship trophies/rings were on display at a BBQ and on the Saturday (9/20) it was the annual Fly In/Touch-A-Truck day at 1B9. The ReMax hot air balloon was doing tethered rides until the wind picked up and scores of trucks, buses, police cars and pieces of equipment were on display for little kids to use as jungle gyms! A couple of beautiful airplanes including a Waco bi-plane, a Ryan Navion and a Cessna 170 tail dragger complimented the trucks/equipment.

The balloon in the wind!

The entire day was a pro-aviation day for me, including having the opportunity later that afternoon to give one of my close friends, (The) Adam Scott a flight instructor from the Plymouth Airport a tour of the New Bedford Regional Airport. We had a chance to catch up with a flight instructor we each flew with years before, Steve, who presently flies with Colonial Air too. 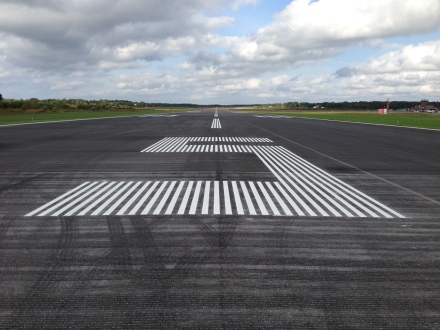 Runway 5 at EWB is looking very good these days, the grooves are complete and a second cost of paint is all that separates the new & improved Runway 5 from completion! Note: more work within the safety area remains before the runway can be opened…

It was fitting that on this all-aviation day for me ReviewBeforeFlight reached the 10,000-view mark. I have greatly enjoyed writing and editing the posts here and will continue to do so. I hope that everyone that reads ReviewBeforeFlight can feel the passion and enthusiasm of our team through our words. As much as I am here to try and share information, help others learn and learn some myself, I really view the effort I invest in ReviewBeforeFlight as a way to share my passion and hopefully encourage the flying ”bug” in others!

Thank you for visiting & please come back soon! 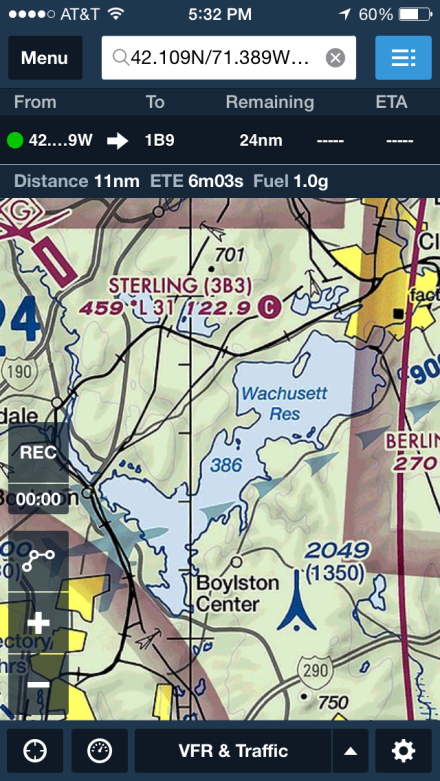 You can see the ‘Snoopy Lake’ in this ForeFlight screen shot… The island in the Wachusett Reservoir is Snoopy’s eye. You can see his snout to the left and his head to the right of the island, then following diagonally down and to the left- his neck, body and his feet…