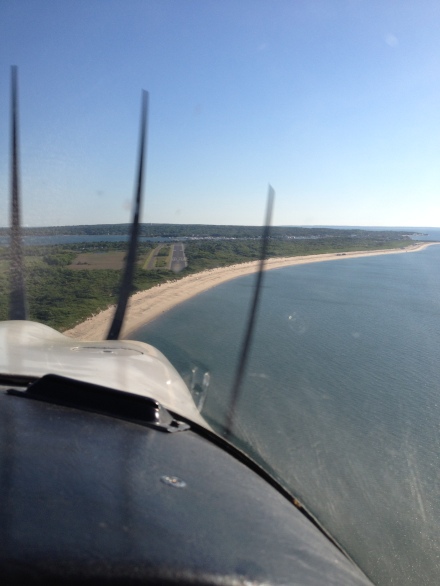 On approach for Runway 6 at Montauk! Such a cool shot, we had to put it first…

I love to eat! I don’t know any other way to put it, and when Matt asked me if I would be a new “Flying for Food” contributor, I couldn’t say no! Pursuing a career in aviation, and finishing my instrument rating, I am very close to starting my commercial/time building portion of my training. As a Part 61 student, I need 250 total flying hours as a minimum requirement, and what better way to build some cross country flying time than to fly for a bite to eat. 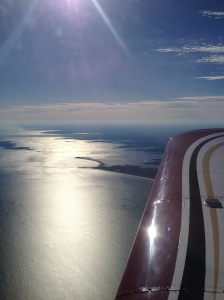 About to cross the Long Island Sound!

On Sunday night of last week, a good friend of mine and fellow aviator Tom Nery, asked if my girlfriend Audra and I wanted to fly to dinner Monday night, seeing as it was going to be a fantastic night weather wise. We both agreed and decided on Montauk, Long Island! Neither of us had been there before, and with the weather finally looking like summer, we thought dinner on the water would be a nice treat. Rick’s Crabby Cowboy Cafe was the restaurant of choice by Tom, and we both trusted that Tom knew what he was talking about when it came to great places to eat! 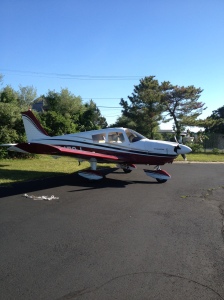 Pippa on the ramp at KMTP!

Pippa (Tom’s Piper Cherokee) and its crew took off at about 5pm with an expected flight time of 40 minutes or so. The flight smoothed out above the tree line almost instantly, and we were on our way! What a view we had, 10 miles and greater of visibility, not a cloud in the sky! We could not even get a word in to Providence Approach, as the skies were experiencing rush hour traffic taking advantage of first real summer night.

37 minutes later, we made a right pattern down to Runway 6 and Tom made a textbook landing over the beach. Pippa was parked, and received a free parking fee, as nobody was in the locked building. Not sure what the hours of the FBO are, but we got lucky! There is usually a landing fee of $15. Rick’s Crabby Cowboy Cafe was less than a 5 minute walk down the street, and we were greeted by the very friendly waitresses. It was a Monday night, so the restaurant was not very busy. Tom, Audra, and I decided to enjoy the summer sun and sit outside right next to the marina, which also sat right next to a small beach…felt like a vacation!

We were served waters to start, and as hungry as we were, our orders were put in quickly. I decided on a Bacon Cheeseburger with Fries. Tom was craving ribs and cornbread before we even took off out of Mansfield and Audra ordered fried flounder and a baked potato. None of us had ever had flounder before, so it was a “cross your fingers its good” type of meal. You really can’t go to Crabby Cowboys with a group and not have the Crabby and Cowboy portion of the menu! As we waited for our meals, we were lucky enough to have some aircraft traffic taking off Runway 6 right over our heads. Aviation enthusiasts like ourselves can never get enough airplanes, no matter where we go! 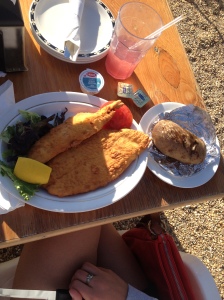 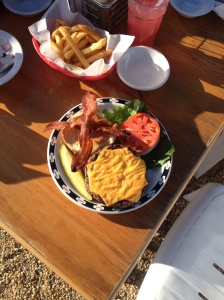 The excellent burger at Rick’s! 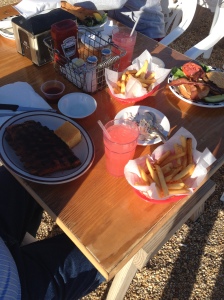 Dinner came out with no delay, and everything was very well presented. The burger was HUGE, cooked to perfection, with two slices of cheese on top, all the fixings and a seeded bun! Tom’s ribs were as expected, smothered in BBQ sauce and served with a big slice of cornbread. They looked delicious…if only I liked ribs! Audra’s flounder turned out to be excellent! A very thin white fish, that was very large as well, with some fresh lemon juice drizzled on top…yum! The “very long” flight must have made us very hungry, because other than a little flounder left behind, we all cleaned our plates! As we finished, the staff of the restaurant were putting logs in the fire pits they have outside, getting ready for anyone who wanted to roast marshmallows as a dessert option! I don’t know about Tom and Audra, but I was way to full for dessert of any kind.

On busy summer nights, Crabby Cowboys should be the place to go, with outdoor and indoor seating, live entertainment outside on the stage, and a dance floor right next to the beach and the marina! The restaurant is open daily from NOON-10PM, and whether it is the fresh seafood, or the 18 hour smoked pulled pork, there is a meal that will suit anyone that dines. 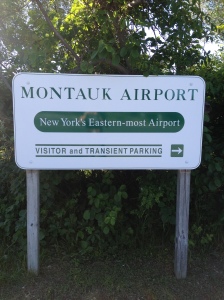 KMTP is the eastern-most airport in New York state! 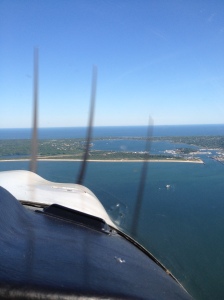 Approaching Montauk, and ready to eat!