One of the pilot self-assessment tools that has become popular is the IM SAFE checklist. Every pilot receives a medical certificate from an Aviation Medical Examiner (AME). The AME issues certificates that are good for 24 or 60 calendar months depending on the pilot’s age at the date of issue. Even though the AME says the pilot is fit now, a variety of things could occur that may temporarily or permanently make the pilot unable to meet the requirements of the medical certificate.

The IM SAFE checklist is designed to be the checklist for pilots checking themselves before flight. This is an important ADM concept because as pilots it is our responsibility to make sure we execute the check properly before we take to the skies.

As pilots we are the product of our training, studying and practice. This means that on any given day when we wake up there is no way for us to be “better” than we are on that given day. However, with some practice approaches and landings we can improve our abilities and then tomorrow we will be that much better.

This FAA-image shows Pilot Capabilities vs. Task Requirements during the various phases of any given flight. The vertical (y-) axis is the “Margin of Safety” and the horizontal (x-) axis is Time. (Author’s Note: Isn’t is strange that the FAA selected a red shading for a good thing?)

Essentially on a given day the red line represents a pilot’s capabilities. This line is established through training and continued learning. The capabilities line fluctuates up and down based on the currency of their practice with aviation skills (ie: maneuvers, takeoffs, landings, etc…). A pilot that practices crosswind landings on a monthly basis will have a higher capability line than the same pilot with the same training and experience that does not practice crosswind landings as often. Thus, this pilot capabilities line is an individual concept for each and every pilot, no two of us have the exact same line…

On the above diagram, the more red shaded space the better, or more safe, the pilot is at a given point in time. The requirements of different flight situations vary and as you can see, over time (bottom axis) the pilot capabilities decrease.

As an aside, take a look at the next diagram, and then back at the previous diagram, notice any similarities? Aside from the added portion of maneuvering, the phases with increased task requirements (above diagram) and the phases of flight where accidents/incidents are most likely to occur seem very similar to me… 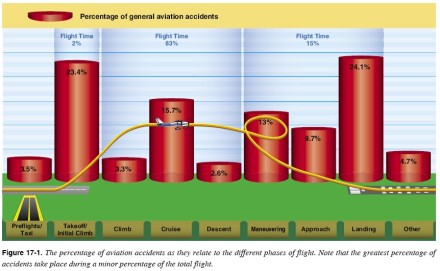 This FAA-image shows when accidents happen… Notice anything similar about this diagram and the previous one?

Back to IM SAFE…

The IM SAFE checklist is not the type of test where a pilot “passes” with 5/6, scoring an 83.3%. Pilots only pass the IM SAFE check if they score 100%… So let’s take a look at what IM SAFE stands for (besides the obvious “I’m safe”)…

If a pilot has any type of illness there is no way that it gives them better judgment as compared to when they are at “full health.” Similarly, any type of illness will cause some type of distraction or decrease in reaction time, either of which would be bad for a pilot-in-command.

Medication refers to any drugs, legal or illegal, over the counter or prescription. Many common medicines including some over the counter products can negatively impact a pilot’s cognitive ability and mixing those with carrying passengers can have grave consequences.  This is true especially if the “task requirements” are heightened by an unforecast condition, such as gusty crosswinds at the destination airport…

The Aircraft Owner’s & Pilot’s Association (AOPA) provides a great tool for their members to check if the medicine they are currently taking will impact their ability to exercise the privileges granted by their medical certificate. By providing the full trade name or the partial or “street” name of the drug a search of the FAA medication database will tell the AOPA member if they can fly while taking the medicine or if they can not fly. Additionally, AOPA provides why this is the case. This is a great resource provided by AOPA that I have used previously and found to be very effective.

Stress refers to any stress and the subsequent emotions related to it. This is a very large concept… Stress could be from the workplace or home. Maybe a pilot got pulled over for speeding on the way to the airport. Or, maybe the family pet passed yesterday. Any of these types of events could cause stress… Any stress will only cause a distraction, which will divert valuable mental ability away from flying and navigating, this will only decrease the abilities of the pilot.

I have heard some pilots talk about using flying as the release, using it to relax after a long day or long week at work. This isn’t how I personally approach flying, but for them it works. The important thing for any pilot to do early on in their flying is to determine how they will approach it. Some pilots are able to use flying as the release, others are like runners. A runner feels pain and often wonders why they around out their pounding the pavement so to say, then after they feel great and can’t believe they almost didn’t got for the run. I approach flying in a similar fashion. In the airplane I’m in the zone, enjoying it but paying full attention to it. Afterwards I feel great, thinking, “Wow, I can’t believe I get to do this…”

This one is an easy one. 8 hours bottle-to-throttle, right? Wrong! Not so fast. The regulations also use the phrase, “under the effects of…” This means that if a pilot has a few drinks, goes to bed and wakes up and has to frequently visit the restroom for a while or has a slightly upset stomach, then they are still feeling the effects of the alcohol. Thus, even more than 8 hours after drinking and with a blood alcohol level less than 0.04%, the pilot is NOT always okay to act as the pilot-in-command of an aircraft!

Being tired is another quality that can get a pilot into trouble quickly. A fatigued pilot will definitely have decreased reaction time and this means that the pilot will not be able to effectively operate the aircraft as well as they should be able to. The associated  increase in reaction time will reduce piloting abilities can only negatively impact a pilot’s capabilities…

Another important thing to remember here is that even though you may not be tired at the beginning of a flight, sometimes approaching the third hour of a long trip fatigue can set in quickly. So even though you might not be tired before the flight, how do you think you’ll be towards the end of the flight, during say, the approach and landing phase, a very critical phase of any flight.

Have you ever tried to accomplish anything when you were hungry? How’d that go for you? I suspect it didn’t go well and that’s because once a person is hungry some amount of their mental ability will be dedicated to thinking about the hunger and how to satisfy it… Thus, this is mental ability that will be diverted away from the ssfe operation of the aircraft and focused on food instead.

Again, like fatigue, even though a pilot is not hungry at the outset of a flight, that doesn’t mean they can make the whole flight without feeling the distracting effect of hunger. An easy way to deal with this is to pack a bottle of water and piece of fruit or a pack of peanut butter crackers in your flight bag. Then when you do sense some thirst or hunger, the situation is easily rectified and becomes a forgotten item as opposed to a potentially hazard causing distraction!

Author’s Note: Some people say that E is for Emotion. Personally, I lump emotions in with stress, since emotions are how people (including pilots) react to stress. Additionally, try fasting for 18 hours then going and doing something simple (not flying). Then, tell me that you can concentrate and focus on what you are doing completely and not at all on your hunger. Maybe you can, but we both know you won’t be at the” top of your game” and as a result your judgment and reaction time will be decreased… Being properly nourished is incredibly important, especially in something as mentally taxing as certain phases of flight can be…

Any one of these IM SAFE components being unsatisfactory, so to say, should result in the pilot stowing the flight bag and making alternate plans for the day. However, if the Eating is the only non-pass, then a quick trip to the store or the fridge should remedy the situation. On the other hand with a cold it may be better to break out the golf clubs and enjoy the nice day on the links as opposed to the imbalance of pressures as a result of the pressure differentials at altitude…

To circle back, any of the IM SAFE items not being satisfactory will only serve to decrease a pilot’s capability line (red line) in that first diagram, as a result the pilot could then approach a situation where the task requirement (green line) rises above the red line. Any time the task requirements exceed the pilot’s abilities the occurrence of an accident/incident becomes much more likely to occur. This does not mean that an incident/accident will always occur when the task requirements exceed the pilot’s capabilities, just that it is much more likely during these phases of the flight.

Lastly, and this is really another discussion on its own… An item from the IM SAFE checklist may not need to be “failed” to bring the pilot’s capabilities below the task requirements. A pilot that hasn’t flown much recently is likely to have lesser piloting capabilities. Pilots without a great deal of recencey in terms of flying and studying aeronautical concepts, even at full IM SAFE strength, may still face times where the task requirements of their flying exceed their abilities. The solution? Fly more and take a flight instructor along to get back into it…