As a flight instructor, I advise my students to check WX, ATIS, AWOS, NOTAMS, and TFRs before arriving at the airport. I try to follow my own advice, but I did not do that last week.  Instead, I checked local weather, AWOS, and TFRs and drove to the airport to go for a flight.  Passing through the gate, I noticed several maintenance vehicles on one of the runways and near the intersection of the other runway.  My first thought was, “we are not going flying today, I think the airport is closed.” 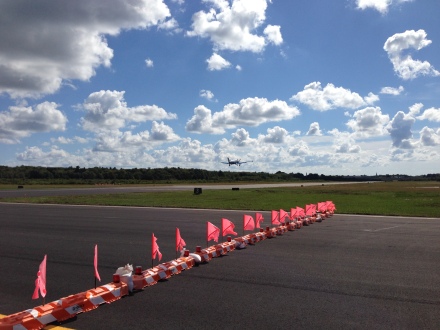 Barricades (lighted and flagged) are often an indication of a construction project on an airport, which can include the closure of various surfaces or the closure of the full airport.

I opened my preferred NOTAM app on my iPhone and found that yes, the airport was closed!  I was upset with myself for not checking NOTAMs that morning.  It could have been a big inconvenience if I took off before the airport closed and tried to return later only to find out the airport was closed.  I might have had to land at a nearby airport and wait out the closure.  Instead, I was only faced with a little disappointment.

And, don’t forget to check navigation aids NOTAMS.  If you are planning a practice VOR approach, it makes sense to check the NOTAMs to ensure that the facility is operational that day. It’s difficult to use the VOR for navigation if the signal is off line after all…

There really is no excuse for not checking NOTAMS these days with the advent of so many EFB apps that provide NOTAM information.  For those who have been flying as long as I have, you may remember the chore of going to the FBO, finding the loose-leaf binder, and reviewing the NOTAMS inserted in the binder.

Failing to check a NOTAM could have consequences ranging from disappointment to far more severe repercussions.

And, this brings up another issue.  How to read a NOTAM.  The NOTAM I read that day indicated that the airport was closed from 1100 to 0200.  It was 9:30am local time EDST.  If I was in the air by 10am, I could not return until after 1pm.  Or, was the NOTAM time in ZULU time?  If it was Zulu time, then the airport was scheduled to be closed between 7am and 10am.

NOTAMs are usually given in ZULU time, so the airport was closed from 7am to 10am local time.  So, actually, I only had to wait about 30 minutes for the runways to open.

Editor’s Note: The flight instructor in me upon reading Jim’s last graph would say preflight the aircraft and by the time you’re done with that and you’ve used the facilities you’ll be good to go. Whereas the airport management professional in me counters that with a more balanced approach, of giving the airport administration office a call to check on the status of the NOTAM. Often times closures can be extended if the planned work does not progress as expected, which does occur from time to time. So, it’s good to be ready and prepared, but make sure you confirm with the airport administration or the control tower that the NOTAM has not be extended once the end time occurred as expected prior to starting up your aircraft… This’ll avoid having to wait around with the engine running when you don’t have to.

The FAA has started to implement some changes to the way NOTAMS are entered, processed, and retrieved. Making it easier for pilots, and other users of the airspace, to access safety critical information.  Until then, NOTAMS can be found on tablet apps such as Garmin Pilot and Foreflight, and online with the FAA NOTAM Search page.

The FAA loves their abbreviations, so if you are not familiar with an abbreviation, you can go online to: https://www.notams.faa.gov/downloads/contractions.pdf

In the meantime, here are some abbreviations that you will often see:

NOT MNT – Not Monitored (Can be used for instrument approach, but not used as an alternative. This is also commonly utilized by airports when field conditions are not monitored during weather events.)

OTS – Out of Service