There are countless techniques when it comes to the preflight inspection, but there is one key element that serves as a solid safety foundation at the conclusion of each inspection to tie all of the preflight activities together… This piece is known as, “The 360”! Let’s discuss…

A preflight inspection can follow a manufacturer’s checklist to the “T” or possibly another procedure that was developed to ensure all items are covered. Previously, while teaching at a school that offered a large fleet of aircraft, I worked with other flight instructors as well as the mechanics to adapt the manufacturers’ checklists into more detailed checklists that incorporated a “flow”. This ensured that all items were inspected and the order was coordinated to prevent bouncing around during the inspection, which could lead to an item being missed inadvertently. Instead, the inspector would progress around the aircraft without having to bounce or backtrack. This procedure allowed the (pilot) inspector to develop a flow of memory items. 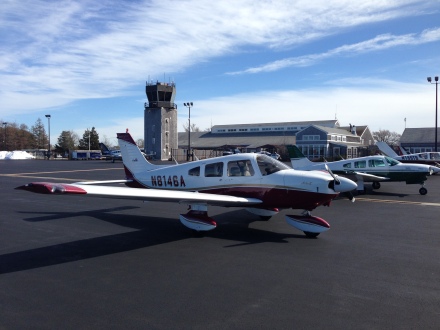 Making an extra, 360-degree, walk around the aircraft with a focus on the big picture can help you avoid missing something critical…

Checklist usage can be completed in multiple ways. There is READ-DO, where an item is read on the checklist then individually checked. Think of this as how you did it when you first started ‘preflighting’ the aircraft. Before you knew specifically what you were looking for or what you were potentially likely to find, you were learning what you needed to check on the aircraft. This is true for experienced pilots transitioning to a new aircraft as well, whether that aircraft is more or less complex. Early during the transition, considerable effort should be invested in learning the checklist items and design of the aircraft. This will enable the pilot to make more effective preflight inspections.

Another method, more prevalent in the preflight inspection environment is the DO-CONFIRM method. An inspector utilizing this technique will complete the checklist first, then confirm that each item was done by reading the section. Any item not specifically recalled will be checked again and thus confirmed. This technique is more common of pilot’s once they are more familiar with an aircraft.

Everyone has their own approach that works. For aircraft I am less familiar with I will utilize the READ-DO technique. However, when it comes to a Cessna 172 (later models) or a Cherokee 180, I will use a DO-CONFIRM approach, as I am extremely familiar with these types due to my experience.

When I mentioned that everyone has their own approach, here is an example… I follow a unique procedure that I developed when I preflight a the Cessna 172. I complete the entire checklist in a DO-CONFIRM method and then I go back and take fuel samples and ultimately complete the fuel quantity checks as the last item during my preflight inspection. For me it’s critically important to always check the fuel level, even if my student has already done so. At this point, once I have checked the fuel quality and quantity, I would stand at the nose and read, line by line, the preflight checklist and confirm I had touched each item. Anything that I did not specifically recall, I would go back and inspect again to be confident in my ‘confirm’. Again, this is my approach and may not work for others, I specifically want to recall the fuel quality and quantity check so I separate it out for my own memory purposes. Before varying from a manufacturer’s procedure be sure to consult a flight instructor and mechanic to ensure you are not going to miss something or do something inappropriate which could jeopardize flight safety.

This leads me to the point of today’s post, the most important part of a preflight inspection. Once the checklist is completed, it’s time for, “The 360”. This is a simple, complete loop around the aircraft. Often times during a preflight inspection laser focus moves from point to point on the aircraft. “The 360” is a simple walk around the aircraft looking at “the whole” as opposed to looking at individual checklist items one-by-one. This is different from the earlier portion of the inspection because “The 360” looks at the big picture as opposed to the first portion of the inspection that called for inspecting items individually such as the flap control arm, the aileron hinges, aileron control arm, counter balance weights, strobe light, navigation light, etc…  “The 360” is a look at the aircraft as a whole, as it sits, on the apron.

I often advise folks not to miss the trail through the forest, but this is a case where a pilot must ensure they don’t miss the woods while looking at individual tress. Items that are commonly picked up on “The 360” vary. These items noticed during “The 360” can induce chocks that remain on any of the landing gear, gust locks, pitot tube covers, flight bags placed on the ground inadvertently, etc… During the winter if an oil pan heater is used, often times disconnecting the extension cord powering the heater is the final step before everyone climbs into the aircraft, but sometimes this is overlooked. (Note- it’s always funny to watch a Cessna 152 taxi out with a 25′ orange tail when the extension cord was missed…) That is the point of “The 360”. This final check of the aircraft as a whole puts everything in focus, including where the aircraft is parked. The location of the aircraft on the apron is important when it comes to ensuring there is a clear taxi route once the aircraft is started.

So next time you fly, once your preflight inspection checklist is satisfied, start at the nose, a take few steps back from the aircraft so you can see the entire aircraft in your view and make a circle around the aircraft, observing “the whole,” and try “The 360” technique!