The 2nd annual DeLand Sport Aviation Showcase was held earlier this month, November 2nd – 4th. For regular readers of ReviewBeforeFlight you might remember my “review” post about the inaugural showcase held in 2016. The first year event was very well executed, and this year the same was true. 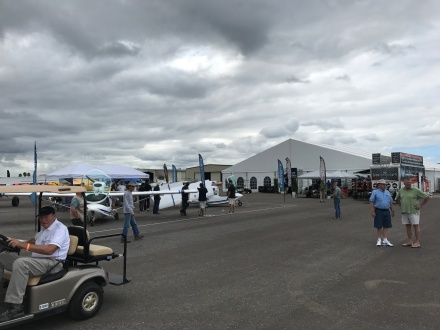 For the second edition of the Sport Aviation Showcase you could tell the event organizers incorporated some lessons learned to improve the event. The registration/check-in process was smoother and easier. The event layout was excellent and there were a variety of information sessions offered for attendees in addition to flight demonstrations as well as indoor and outdoor vendors.

The well-announced flight demonstrations were entertaining and the forum sessions provided great, thought-provoking presentations. DeLand is one of the most well known sky diving locations in the southeast United States and the airport lived up to its reputation with jumpers seemingly constantly dotting the sky!

As was the case in 2016, I attended day 2 of the show, the Friday. I made the short drive over to DeLand and again was greeted by good on-road signage and friendly welcome staff at the gate and parking area. Last year the weather was clear and warm, this year the temperatures were much more tolerable but the sky was cloudy with showers in the area, though none affected the event while I was in attendance. 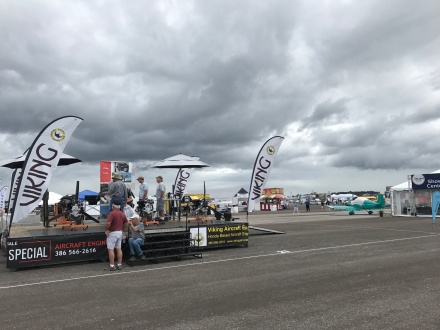 Close by showers held off for the most part!

One of the areas where the event struggled last year was attendance and to me it looked like there was a better crowd this year, even with the potentially threatening weather. I confirmed this with a number of vendors I spoke to who also indicated that the traffic was much better this year than last year. This was great to hear that the event is growing Fundamentally, in execution, the event is excellent so it was great to see that the popularity was increased this year.

On the way out, I noticed the prominently placed signs already advertising the 2018 event, which promises to be a great show if the improvements from 2016 to 2017 give any indication!