All to often active pilots slowly turn into inactive pilots because they don’t have anyone with whom they can share their passion. It’s a ton of fun to go flying and I enjoy going up solo every once in a while, but for the most part I enjoy taking others flying, or going up with others even more.

Whether it’s a student pilot who I’m training or a friend who I know will enjoy the experience, it’s just more fun to share the excitement. It can be a struggle for pilots whose spouses don’t enjoy flying. Especially for pilots who aren’t flight instructors. As a CFI, I have had the lucky experience to be able to share my passion for aviation with so many others who also had an interest in flying. A circle of friends is an excellent group of potential co-pilots on joy rides and $100 hamburger flights.

The next step to enjoying a flight beyond having others in the airplane with you is to have a group of other aircraft and their pilots/passengers along for the trip! Group “fly outs” can be very difficult to organize and execute. With so many variables it is difficult to get everything aligned. Between aircraft availability, weather and more there is a lot of things that could interfere with even the best laid plans. Over the years I’ve been a part of many group flights. Some were recurring flights, aimed to drum up interest over time and others were single chance happenings.

Group fly outs can be a great way to encourage local pilots to get out and fly. The more planes the cooler the picture at the destination will end up being!

One day, years ago, when I was an aviation major in college a group, I was sitting at a lunch table with a group of my friends. The conversation of how nice a day it was came up and one of my friends (we were almost all pilots, and the few that weren’t could have easily passed the private pilot check ride oral exam simply as a result of over hearing our conversations for so many years) mentioned how it would be a great night to go flying. We each checked our phones, reviewing the forecast and mutually agreed, it was perfect evening in New England for a dinner flight.

Each of us booked airplanes and called our friends. We each rented planes from different airports and ended up converging on the Mansfield Airport, where I was working. From there we had a group of 5 airplanes fly south to Groton, Connecticut for dinner. I remember the meatball sub I ate as being underwhelming, and I vividly remember my friend Craig who was bringing up the rear on the flight down catching a great joke from the tower controller about being last to arrive… Over the course of my four years in college we tried to do dinner flights many times, a few times a couple of airplane would end up at the same spot but that one evening in Groton, Connecticut was the best attended and by far the most fun.

Years later one of the flight instructors at the flight school where I was working created a program called, “Wednesday night dinner flights.” This program went on for a while and was successful at getting people to get up and fly. Over the course of the program on many occasions groups of flight school airplanes and airplanes based at the Mansfield Airport would fly to a destination and everyone would share (usually) aviation related conversation over dinner. I remember one of the flights I went on with a student of mine, we flew to Windham, Connecticut. Again it was great fun, especially taking the short cut from the airport to the Aero Diner which required scaling an unkept hill and fitting through a large hole in the fence to reduce the walk from 1/2 a mile to 1/4 of a mile…

On my recent trip home to Massachusetts, my former student Peter, unbeknownst to me organized a “flight of friends” to take place while I was there and could participate. I told Peter I was itching to do some flying and he allowed me to use his Cherokee to get current and also spend some time with him surfing the skies of southeastern Massachusetts.

On one of the days during my visit Peter recruited some of our friends to go flying and got everything set up… As I wrote in my previous post about the benefit of traffic information during group flights (HERE), a group of three airplanes with 6 of us flew up to Sanford Maine for a late breakfast. The trip was a lot of fun and a great exclamation point on my vacation! 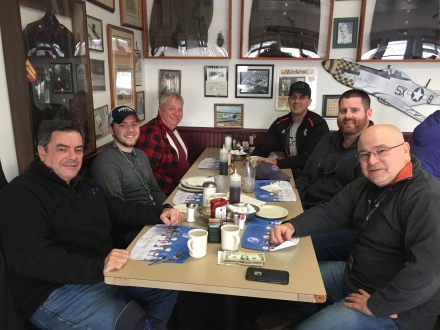 I highly recommend that all pilots get involved with group fly outs, and if they don’t exist at your airport, get them started. If there is a flight school, talk to them to spread the word and be a catalyst to get the program going. Group fly outs benefits everyone involved – pilots stay more active and thus more safe, airports will sell more fuel and airport restaurants will be busier! Smoky the Bear says, “Only you can prevent forest fires.”

Well I say that YOU can help rejuvenate general aviation! So there you have it, get a group together and go do some flying!