Whenever a B-17 makes a stop at one of the airports near me, I try to stop by, do a walk around and then wait in line for a visit through the airplane.  More recently I have taken my young grandchildren and they are impressed with getting that close to an airplane.  They are a little young still and do not appreciate the background of the World War II bomber.

My father was a copilot on B-17s in Europe during WW2.  He completed thirty missions at the end of 1944.  After the war he continued to fly B-17s as a captain in an Air Sea Rescue Squadron.  In the early 1950’s he started piloting a B-29 in air sea rescue operations.  So, when I learned that FIFI, a B-29 rescued from the China Lake Bombing Range and restored by Commemorative Airforce, would pay a visit to Nashua New Hampshire’s Boire Field I stopped by to see an airplane my father flew more than sixty years ago.

Unfortunately, my father died when I was very young, so I never had the opportunity to talk to him about flying these four engine bombers.

My visit to Boire Field was on an overcast day with a light rain.  I was with my friend Michael Neece, another pilot, and we waited in the rain for about an hour before climbing up through the open bomb bay doors and into the forward fuselage area.

There are a couple of dozen B-29’s on static display throughout the country, but only two airworthy B-29s that are flying, FIFI and DOC. FIFI is operated by the Commemorative Air Force (CAF). The CAF fleet travels across the country each year, putting aviation history in our figurative backyards.

As we waited for the group in front of us to look around the area just before the cockpit, I turned around to see a tunnel about 25 feet long.  Then I remembered that the B-29 was pressurized and the tunnel went over the unpressurized bomb bay.  The tunnel permitted crew to access the aft fuselage. 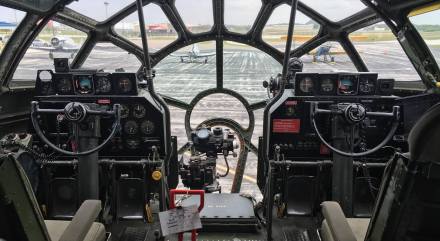 Photos taken of the B-29 cockpit give the impression that it is roomy.  But as large as the B-29 is, it was still tight inside the cockpit.  The windshield/nose made up of plexi-glass panes makes it look like the Millennium Falcon from Star Wars.

We could go up to, but not into the cockpit, so after taking a look at the cockpit, we went down a ladder that brought us out just behind the nose wheel.

Before leaving the field, we had the opportunity to watch FIFI make a take-off and landing.  Inspite of the dreary weather, the trip to Boire Field to see FIFI was well worth it.

One thought on “Catching up with History: FIFI the B-29”