This is one of those topics that can incite a little bit of passion depending on where pilots fall on the issue. Some pilots consistently wear baseball style caps while flying. Let’s face it, it’d be pretty difficult, if not impossible to fit a full-brimmed style hat like a cowboy hat under a standard aviation headset, so there aren’t too many flying cowboy or cowgirls out there…

I have flown with a baseball cap on a few times and in honesty this is a topic I’m not overly passionate about but one I find interesting. My general motto is to increase safety and reduce risk whenever possible to do so. Wearing a baseball cap is something I count in this.

Pilots typically wear hats in the cockpit for the same reason I wear my Red Sox hat at an afternoon game at Fenway Park. The hat bill provides shade, making it easier to see and for those of us with farer skin, this sun protection also helps to prevent sunburns! 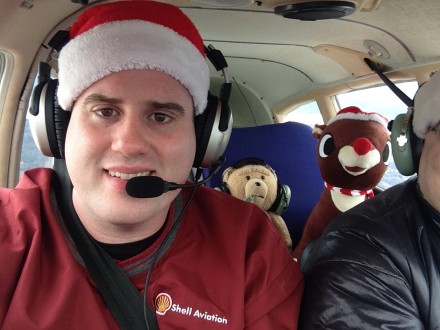 Every year I go flying on Christmas Eve, and while I do wear a hat, it doesn’t have a brim… I just have to keep the odd top of the hat behind my headset…

Let’s think for a minute about this though… The hat bill provides shade, meaning it blocks out the sun – this is a good thing. But this could also be accomplished by a shaded visor in the airplane cockpit (when equipped) or with sun glasses, which are readily available at a variety of locations.

Blocking the sun isn’t a bad thing, but it’s the other things (like other airplanes) which the hat bill prevents from entering into the pilot’s field of vision which represents the issue with wearing a (brimmed) hat while flying. In the same way that the hat bill will provide shade by blocking the sun, the hat bill can also prevent the pilot from seeing another aircraft, maybe slightly above and ahead descending, which due to the hat blocking the pilot’s view will not come into view as early as it may have if the pilot was not having their view partially obstructed by a hat. This means that with the hat, once the pilot finally notices the other aircraft they ill have LESS time to react!

Sure some people will think I’m overthinking this, but no one has been able to explain a way that wearing a hat increases safety in the cockpit, so until then I’ll keep my hat in my flight bag while I’m flying. Just some food for thought!