ReviewBeforeFlight is a web destination for anyone with an interest in aviation, from airlines pilots to aviation enthusiasts and astronauts to sport pilots! This post is for all of our loyal “plane spotter” ReviewBeforeFlight-ers! Taking pictures of airplanes isn’t as easy as you might think! 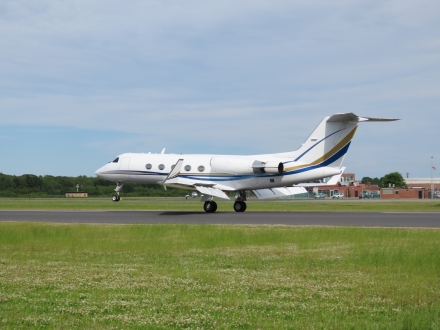 One of my favorite pictures, I was able to capture this Gulfstream III landing at EWB during July.

Flying an airplane isn’t awfully difficult, but it is a learned skill that takes a good deal of effort to master… Pretty much nothing in aviation is overly easy, an illustration that those of us that love aviation are completely dedicated to it!

The same Gulfstream III was a little more tricky to capture on a misty, foggy day with less light to work with…

Well the reality is it’s pretty tricky if you want good pictures! For average pictures, there’s nothing to it… This is something I have taken for granted for a long time. Never having a “good” camera I always wrote off my bad pictures of planes as being the result of not putting any effort into capturing great images and a limitation of equipment. Yet every now and then, I’d get an incredible shot! Whether it was with my old HP digital camera or my first iPhone, or even one of my old BlackBerry smart phones!

That was then… Now is a different time. Now I have a pretty advanced point-and-shoot digital camera, nothing overly exciting, but something more advanced than my iPhone 6. The camera has allowed me to gain a whole new respect for photography; it really, truly is an art!

What I’ve found is that taking pictures isn’t awfully difficult, until things start moving. Add in high speeds, the dynamic environment of an airport and the fact that aircraft not only move left and right, but also up and down… Thus, taking pictures of airplanes seems to be one fo the more difficult things to do, short of maybe taking pictures of birds, which also fly but are much smaller targets…

This Gulfstream 500, one of the few produced, made for a great picture target… Unfortunately, I didn’t know it was coming so I was looking towards the northwest and I was a little further away from the touchdown zone than I’d have liked to have been…

In any event, from December until I left EWB at the end of October, I worked to get better at taking pictures of the traffic at New Bedford, in addition to the other picture taking I did when I wasn’t at work… Now I’m taking pictures of float planes, which has proven to have a whole other set of challenges…

Since I started to take the photography seriously in December I have learned a couple of important things that any plane spotter with a camera should keep in mind. Granted the biggest challenge to plane spotting is finding a good location where you can view aircraft and take pictures without being bothered. I was lucky to have access to an airfield and a real business-driven need to take the pictures while I was at New Bedford… Now I have access to the docks at the Tavares Seaplane Base to capture images of the float plane traffic there, just as good! That said, here are some concepts that you might find useful to apply in your own airplane photo taking!

The weather is one of the single largest components of good airplane picture taking besides having a good location (which we’ll explore in more detail shortly!). The current status of the weather at picture time plays a role in your photography… Just because it isn’t clear and sunny doesn’t mean you can’t get great shots!

The first step is checking the weather in a conventional method. Using a newspaper, the cable news or even a weather app will tell you a lot of what you want to know. Clear and sunny days (windy of calm) mean crisp, bright pictures, making it “easier”. When there is less light on a cloudy day, great shots can still happen, though with less light it can be somewhat limiting…

Knowing the wind direction, allows you to know which runway will be in use, and thus where you’ll be more likely to get the great pictures!

I’d recommend checking an aviation weather source for the detailed weather. Checking the METAR or TAF for the local airport will tell you the specifics. Hazy, foggy days can be tougher. Checking the forecast (TAF) can give you a good heads up of what to expect!

The other benefit of listening to the ATIS (Automatic Terminal Information Service) on a handheld radio or via calling in on your cell phone tells you one of the key components, the wind. How does wind impact picture taking? Well, the wind direction will dictate which runway will be in use at the airport. If you are visiting an airport that has great viewing locations for some runways, but less than desirable locations for others, it may be worth checking the weather in advance… No sense is wasting a trip to the airport, right?

The time of the day plays a major role in your aviation photography. As you’ve probably noticed at some point during your life the ‘light’ changes throughout the day…

As the day goes on the sun gets higher in the sky. The higher the sun is in the sky the better the lighting, thus the best situation for pictures at the airport is the midday, early afternoon timeframe.

I was on the northwest side of the runway to capture this shot of a Challenger departing towards the southwest during an early spring late afternoon… You can see the “heavy” light of late day illuminating the bright side of the aircraft.

Once mid-afternoon rolls around the sun starts sinking in the western sky, means that there is plenty of light, but large shadows start to grow. This means that the best pictures are taken looking (generally) towards the east. Another factor that limits where the best pictures can be taken. Further, during the winter months, the best view is towards the northeast, as the sun is further south in the sky…

Another key item to remember is that if you do take pictures facing away from a setting sun, you’re likely going to be projecting a shadow into the foreground of your picture. This is something an amateur photographer falls prey to, but is an easy thing to fix based on careful aiming and zooming.

It isn’t impossible to take pictures towards a setting sun, in fact there area great effects with ample light and the contrast of the aircraft silhouette up against the light…

Beyond the weather and the time of day, having a great view and a solid spot to take pictures from is a key component to good pictures. Applying a little bit of your aviation knowledge makes all the world of difference in your pictures. For instance, if you’re looking to get the “touchdown” shot with the tire smoke clouds, you’re better off being as close to where the aircraft touchdown as possible.

A Global Express landing, my vantage point just outside the runway safety area was just slightly beyond the touchdown zone (large white areas on the runway).

Knowing that most aircraft follow a glide slope (instrument or visual) down to the “1000-foot-ers” means that just beyond (hey even the big boys float it sometimes) the touchdown zone markers is the place to be. A great zoom of course can overcome location, but it is far easier to get good landing pictures from the approach end of the runway than the other side of the airport.

Similarly, if you are aiming to get the “climbing out” shot just after takeoff, it is best to be at the departure end of the runway. This relates back to the first point about knowing the weather, being upwind is the best place to get the climbing away pictures…

On one early summer Saturday morning I dedicated the day to getting good pictures at EWB. I was moving back and forth from two different “infields” (the grass islands between the runways and taxiways). One was adjacent to the 1000 foot-ers, the other location was roughly 3500′ down the runway, roughly where most corporate jets would be rotating or have just rotated… It was a morning so I was on the south side of the runway and trying to look towards the west slightly, giving me the best lighting. The morning was strange going from clear to overcast and back to clear as the clouds moved through!

As you can see there is a great deal that goes into capturing aircraft operations with epic pictures… The final thing to remember is that you can always be better and should always try to improve!