One of the highlights of my year each year is the annual Massachusetts Airport Management Association (MAMA) conference. Having the ability to spend time with so many like-minded, passionate aviation professionals is a great opportunity!

This year the event took place at the Ocean Edge Resort & Golf Club in Brewster, MA; continuing the rotating around the state as last year we were in Sturbridge, MA. There were a variety of highlights, along with a ton of great information shared. Each year I enjoy the networking, learning and idea sharing with the other airport manages, vendors and airport engineering firms from around Massachusetts and New England. Not to mention the opportunity to spend time with the teams from the funding agencies of MassDOT Aeronautics Division and the Federal Aviation Administration (FAA). 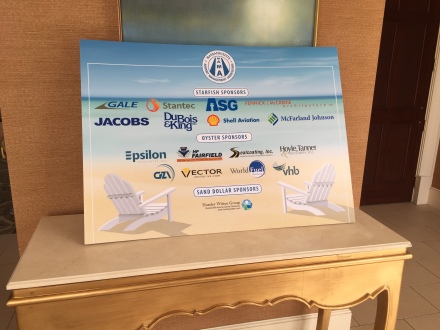 The conference was only possible because of the generosity of so many great sponsors!

The organization President, a longtime friend, Kelley Dinneen kicked the conference off with an insightful presentation before turning it over to the FAA New England Region Deputy Administrator Todd Friedenberg who gave us all an update on what is happening at the FAA nationwide and specifically here in the New England Region. Todd couldn’t stay long because he was off to make his own long solo cross country flight. The air traffic controller by trade has been diligently working towards a pilot certificate and he’s in the home stretch now!

One of the early sessions of the conference was by led a gentleman named Chad Nixon who has also worked as an adjunct professor. He gave a great presentation on the multi-generational workforce present in the aviation industry today. His content and delivery were engaging and insightful, a great way to get the conference rolling from a programming perspective.

Even though Chad’s presentation was not aviation-centric topic it was management related and it was one of the better portions of the program in my opinion. Multi generational work forces are something we are all dealing with these days. As we see more baby boomers nearing the end of their careers and more Gen X, Y and Millennials advancing in their careers the workplaces becoming very diverse.

The lunchtime speaker for the first day of this year’s MAMA conference was Dan Wolf, the founder and CEO of Cape Air Airlines. While he may be an elected official (State Senator representing the Cape and Islands on Beacon Hill), Dan is also one of the most passionate aviation people you’ll encounter. I learned at a previous meeting that Dan and I share an affinity for floatplanes, something Dan spoke fondly of once we made the connection.

Dan’s lunchtime talk was about Cape Air, Dan’s pride and joy, aside from his family. Remarkably Dan continues to fly the line on Saturdays between Proviencetown and Boston, the original route he launched in 1989! Dan’s passion for Aviation really came through in his talk as did his ability to articulate how we need to work together to advance aviation and all transportation infrastructure in the future.

One of the points Dan hit on was the replacement for 100LL Aviation Gas (AvGas). Cape Air, with a fleet of close to 90 Cessna 402 aircraft, burns a lot of AvGas annually. Dan mentioned that he expects, as a result of his and Cape Air’s efforts as part of the stakeholders team that there will be a commercially available alternative to AvGas on the market, being distributed to end users by the first quarter of 2018! Really not all that far away from right now, if you think about it, a little more than a year away. Isn’t it crazy? It’s almost 2017!

Dan’s brother Jim, the head of energy for Cape Air spoke after lunch on Monday as part of a presentation on solar energy. Cape Air’s headquarters at The Hyannis Airport is fully solar powered and has been for some time now. This effort led the way for roughly 20 acres of solar panels on the Hyannis Airport, resulting in a great deal of revenue for the airport. Jim’s comments on clean energy and the value of clean energy were extremely insightful. As much as Dan loves aviation, Jim is passionate about clean energy and being social responsible, a quality we should all aspire to!

The dinner speaker on Monday was the President of the Aircraft Owners and Pilots Associate (AOPA), Mark Baker. Mark, another seaplane guy, is a great advocate for general aviation. He has been a pilot for many years and is very intune with the industry and the pilot community that he represents.

Mark was nice enough to take a picture with me after we spent some time discussing float flying!

Mark spoke about a lot of good that AOPA has been up to recently. As a Premier member of 15 years, I was very happy to hear about the ongoing efforts. In addition to the rusty pilot seminar program to try and get more lapsed pilots back into aviation, AOPA has begun starting to target children again as future pilots. A pilot program (pun fully intended) in 250 high schools right now is allowing high school students to complete a private pilot ground school course for credit to put them ahead on the track towards a career or hobby in aviation. This was an initiative I was literally pumped to hear about and one that I hope to be a part of as an advocate or is trust or some day.

As with any commentary from anyone at AOPA Mark’s comments also included addressing the 3rd class medical reform, something that remains high on AOPA’s priority list the imitative has a great deal of support in Congress and Mark indicated he felt good about action coming soon on the matter. Though, I do recall hearing a very similar message the first time I met Mark and had the opportunity to listen to him speak at the AOPA regional fly in event at the Plymouth, MA airport (PYM) late last summer, so I’m not holding my breath on the medical reform happening anytime soon…

While I have no interest in operating drones, I do recognize their value to a variety of industries and the I profane of education on the subject for those of us in the airport management and operations field. Justin Newman of the Commonwealth of Massachusetts Fusion Center gave a very insightful presentation on Tuesday on the topic of drones.

Typically, as he admitted, Justin gives information presentations to law enforcement personnel on drones, not aviation industry professionals. Justin’s talk was very good nonetheless, extremely informative and I’m glad I attended his session, I took away a good deal. Recently, we’ve seen the FAA levy some significant fines against drone operators and one of the interesting points of Justin’s talk was the restriction on drone operations around. Airports. Massachusetts is home to 39 public use airports of a variety of shapes, sizes and utilizations. When you diagram 5-mile radius circles around each airport on a map, there isn’t a lot of open space available for drone operators across the state. Yet we continue to see drone usage in areas around. Airports with authorization from the airport administration or control tower manager.

Education is the key to drones, most operators of small quad copters are simply looking for cool video footage or epic pictures, they aren’t operating with a nefarious intent. Thus, it is incumbent upon the aviation industry to ensure that commercially available drones allow for some type of information to be provided for “new adopters” of the technology…

One of the most anticipated parts of the conference was when we all got to hear from the new Administrator of the MassDOT Aeronautics Division. Dr. Jeffrey DeCarlo took office on September 1st and he has certainly hit the ground running. Dr. DeCarlo’s talk was both informative and motivational. Jeff gave praise to his predecessor Chris and noted that we as a statewide airport system need to work to maintain the work previously completed as well as leverage this for our future.

One of the more amazing parts of the MAMA conference was literally a single slide. Dr. DeCarlo managed to summarize, in an orderly fashion, the entire statewide Airport System Plan on one single slide and actually have it make sense. During a meeting I was in with Dr. DeCarlo the following day at EWB, I mentioned to him how impressive I thought the slide was. He was happy to hear his efforts were noticed.

The final speaker at lunchtime on Tuesday was State Senator Thomas McGee. Sen. McGee represents an area on the north shore which does not include an airport, but he is the co-chair of the joint committee on transportation for the Massachusetts legislature. Knowledgeable on our key issues in aviation, Sen. McGee spoke highly of the efforts of MAMA and how we could work ever kore closely with his committee to advance the aviation infrastructure across the state of Massachusetts.

All in all the conference was pretty good, there were a bunch of additional great sessions I couldn’t list here, include the one on digital NOTAMs that Erick from EWB and I gave… Speaking of which, MAMA got very creative with the annual speaker gifts this year. Rather than a trinket or candy, MAMA made a donation to the Jimmy Fund on behalf of every individual who took part in the conference by giving a presentation. I thought this was an incredibly thoughtful gift for speaking, a much better use of the money than buying a box of candy, that’s for sure!