As pilots, we have a need for flight, a need for adventure, a need for a good breakfast on a Sunday morning. If you have a Sunday morning to kill and want to enjoy the scenery, or build cross country time, Honesdale, PA is the place to go. About 60nm to the west of the Hudson River, you will find Cherry Ridge Airport (N30), situated between the picturesque hills of Pennsylvania. Tom, Audra and I decided to venture out the day after the 4th of July to give it a shot (for the 2nd or 3rd time, after weather did not permit in months past).

An early departure out of 1B9 gave us smooth air for the hour and forty five minute flight at 6500 feet. The nice thing about “Pippa” (Tom’s Cherokee 140), is the music that we enjoy for the majority of the flight. For some reason, a flight with music makes it that much more enjoyable! The 184nm journey gave us plenty of time to talk, laugh, listen to music and look out over Connecticut, the Hudson River and the incredible windmills on top of the hills in New York. Encroaching on Sky Acres, we had some low level cloud cover, and thought of an alternative, but saw light at the end of the tunnel, and there was clear blue skies as we approached N30. 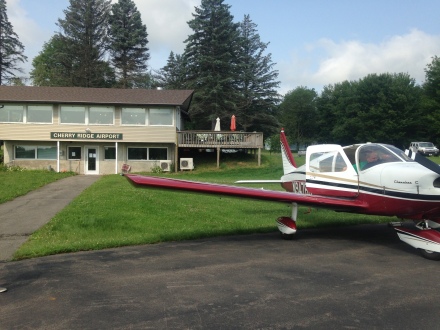 N30, or Cherry Ridge, was fairly busy when we arrived, and only got busier as the time went on. We landed, and parked right outside of the restaurant, with other spots around us filling up. The 2900 x 50ft runway gives pilots good practice at short field takeoffs and landings, and The Cherry Ridge Airport Restaurant gives a great view to the runway with its large windows and outdoor seating. It is a small airport, with a small restaurant, but they pack customers in comfortably, and the service is very quick! They offered a breakfast buffet or the traditional menu. 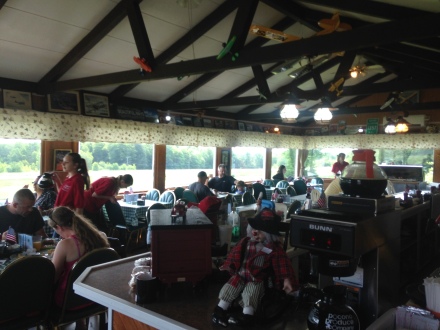 I went with the traditional menu and ordered pancakes, homefries and bacon, which were all delicious and perfectly cooked. Audra went with the French toast, and Tom decided on the buffet, and enjoyed every bit of it! The choices were great, and it was always fresh. We had a great seat by the window, and there was a continuous line of aircraft taking off and landing. There were families, kids, young and old all at the airport, which was nice to see.

As we were leaving, it was almost like every aircraft taking off or landing was putting on a show, as the many eyes watched the piloting skills. Tom did a great short field takeoff, and we made a climbing right turn up to 7500 feet. Audra was able to enjoy a nap on the approximately hour and a half flight back, and Tom and I kept our eyes outside the plane looking at landmarks, airport and aircraft around us. Tom made a great landing back at 1B9, as always, and we ended our day at about 12:30. A little over four hours, and we did a roundtrip to PA for breakfast, not bad at all!

Cherry Ridge airport and restaurant is a definite recommendation from the three of us. There web address is http://www.cherryridgeairportrestaurant.com/home2.html. They are open Monday through Thursday 8-4pm, and Friday through Sunday 8-6pm. Stop in for a cup of coffee on a cross country flight, or take a friend out for lunch! Ask the staff about their story, as the family has moved their life to make this restaurant work! It is a great place, and you will not regret the visit or the flight. Enjoy!