There are a few simple, yet often overlooked things that pilots can do to make their communications with control towers more effective, efficient and easier! You’ve probably heard the old aviation adage that a pilot short be ahead of the airplane, well a prudent pilot can use these skills to help make the lives easier of the air traffic controllers they work with. It’s really a win, win!

Next to my desk at work is an aviation radio that plays the tower frequency transmissions all day. It’s there so that is something important happens or begins to happen I can be ahead of the game. The other result of having the radio there is I’ve developed a much better understand of communications from the controllers point of view. Add together with countless times I have conversed with the controllers in passing or during a visit to the control tower, and I’ve been able to learn a great deal from them.

Many pilots tune into the proper tower frequency after listening to the Automatic Terminal Information Service (ATIS) to get the weather information. ATIS of course is used to provide important information (sometimes in addition to weather, i.e.- TFR’s) to pilots without clogging up the tower frequency itself. The pilot knows what they want to do, they know what is happening at the airport, by virtue of listing to the ATIS and the tower frequency for a few minutes… So, the pilot waits for a break in the frequency and takes their shot, “New Bedford Tower, Skyhawk 12345, 10 miles north at 2,700’, inbound for landing with Delta.” 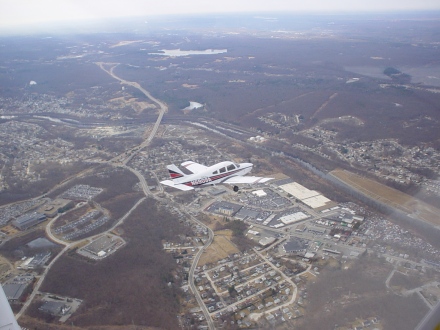 Making a courtesy radio call, ensures there are no wasted transmissions and it reduces the radio chatter, because the controller is ready to communicate!

The pilot delivers a perfect transmission, something even the most seasoned pilots would be proud of, except there is a problem. The pilot knew what was happening on the frequency and at the airport, but they didn’t know what was happening in the control tower cab itself. The controller may not have been patiently waiting to hear your call, because they didn’t know to expect it. They could have been on a land line with the close by approach facility getting a squawk code for a soon to depart aircraft or maybe even coordinating a time departure when a flow restriction is in place… Moral of the story is, the beautiful transmission was wasted…

The fix for this is really quite simple! Rather than starting off by “unloading” with everything at first, pilots should make a first, short call, to get the attention of the controller. Essentially, to serves as a primer for the conversation. Think about it, do you go for a run without stretching? Not if you’re smart. I go for a run most week days mornings before work and before heading out for my 30-45 minute run, I spend 15 of so minutes stretching… The first control transmission follows the same logic.

The first call to the tower is very simple, “New Bedford Tower, Skyhawk 12345, with a request.” This alerts the controller that you are there and looking for something. Most times you’ll receive a quick response, “Skyhawk 12345, New Bedford Tower, say request.” At this point you can deliver the same transmission mentioned previously, expect this time the perfect radio call is not gone to waste, it is quickly followed with, “Skyhawk 345, report 3 mile right base for Runway 23.”

Often times when you’re arriving at and flying around an airport with a control tower, you’re not the only one there, at least not for long. This next point is one of the “advanced concepts” I would try to impress upon all my students, but I often found that only the students that excelled with their training at an above average rate were able to master this…

Knowing where other aircraft are in the traffic pattern is a key to effective and efficient radio communications!

Again, we can go back to the adage of bring ahead of the aircraft, this is another way to just plain, be ahead. If you can make your communications more efficient you should do that. I don’t mean not including key information, like the multitude of pilots that make transmissions at non-towered airfields without their tail number (but that’s a rant for another day). I mean, watch what is going to develop. Let’s go back to the previous example where we were flying Skyhawk 345, entering a 3-mile right base for Runway 23. Stay with me here for a minute, let’s say as we’re approaching a 5-mile base another aircraft, a Piper Warrior, reports midfield left downwind for a touch and go also on Runway 23. The tower instructs the other aircraft that they are cleared to land.

Upon reporting our 3-mile right base, the tower controller is going to respond, “Skyhawk 345, number 2 following a Warrior on 1-mile final.”

This will require a response from us, “Skyhawk 345, traffic in sight.”

Which would be followed with a reply from the control tower, “Skyhawk 345, number 2, cleared to land, Runway 23.”

We heard the Warrior report midfield downwind about 3-miles ahead of our required radio transmission; this provides us plenty of time to look for the Warrior… So it’s likely we’d have that aircraft in sight by our 3-mile base call… If we did have the Warrior in sight, we could greatly reduce the number of radio calls required by simply making a more efficient radio transmission, “New Bedford Tower, Skyhawk 345, 3 mile right base for Runway 23, Warrior traffic ahead in sight.”

The simple addition of the other traffic (specifying which traffic in case there are others in the pattern) allows the tower to response, “Skyhawk 345, number 2, cleared to land.”

Wasn’t that second method much quicker and more efficient? Yes, yes it was… This is just a simple example of how to be more effective and efficient on the radio. By adding in that one piece of information, you single-handedly reduce the number of transmissions required and you also illustrate to your flight instructor, other pilots and the controllers that you are a competent pilot and ahead of the game!

The rules of the runway!

The tower will respond something along the lines of, “Cessna 345, New Bedford Ground, taxi to Runway 23, via Bravo and Alpha, cross Runway 14.”

However, the common improper response would be something along the lines of, “Cessna 345, Bravo, Alpha, cross Runway 14.” This response is missing one important component, the Runway assignment…

This situation will require the controller to ask, “Cessna 345, please confirm runway assigned…” Which is easily answer-able, but again this ties up the frequency and makes more work for both you the pilot and the controller… Similarly, runway crossing must be read back, otherwise the controller will have to query back to ensure you know what you can or can’t do…

These 3 things may seem overstated, but it amazes me how many times extra transmissions and thus extra work for both parties (pilots and controllers) is required… The key is to be Safe, Effective and Efficient, the S-E-E method, something we’ll explore in more detail in another post…