Annually on the last Saturday of March (recently) the FAA New England Region has hosted their Aviation Safety Expo in Nashua, NH. Last year I flew to the event with my friend Peter and his Cherokee was one of more than 30 airplanes on the ramp for the event. This year was a different story. I drove to the event and wore a winter jacket as constantly moderate snow kept the airfield quite in terms of arrivals and departures for the day. Around lunchtime I took a quick look at the ramp, NO planes… As has been the story of 2015 this year, the effects of snow touched another event. Quite a difference in years, last year I attended the event in shorts and a polo shirt, not the case this year!

Talking with one of the event committee members during the afternoon, they said attendance was strong, even with the weather! This was encouraging to hear! The vendor section featured another great group of aviation businesses from MassDOT & NHDOT Aeronautics divisions to the EAA and of course a large group of FAA organizations, plus MANY more…

The course selection this year, in my opinion, seemed to be less than previous years. This year there were more 2-hour seminars included, as opposed to the typical 1-hour blocks. This of course, cuts down on the number of different sessions, but I do see the value in this type of schedule as some topics require and deserve longer time blocks. This year also featured a handful of “Professional Pilot” themed courses, as the event committee looked to expand the reach of the event and from what I understand this was extremely well received!

Any time more than 200 pilots spend some time on a weekend expanding their aeronautical knowledge and learning about safety related concepts, I believe it is a success! I have always been a proponent of the FAA Safety Team and continue to be a proud Safety Team Representative. My only hope is that more pilots start getting involved with these types of activities. Just because the attendance was strong doesn’t mean that the Safety Team’s work is done, it’s time to grow the attendance and reach even MORE pilots!

The sessions were and have always been great insightful opportunities, but this year the keynote speaker stole the show. I have had the opportunity to hear Red Bull Air Race competitor and air show pilot, Michael Goulian speak before, but I wasn’t going to miss the opportunity. I woke up at 5am to make the 2-hour drive up to Nashua. There was no way I wasn’t going to be their for his talk at the start of the event.

Mike gave a motivational and educational talk about safety cultures in aviation. I say Mike’s talk was educational because everyone of the attendees (it was literally standing room only in the large Daniel Webster College auditorium) learned something… Mr. Goulian’s use of his Red Bull Air Race experiences to illustrate common general aviation safety issues was exceptional; I was really impressed and can only hope that the talk was recorded on video so others can learn what those of us in the auditorium learned.

Mike Goulian, the keynote speaker on safety cultures in aviation!

I also described Mike’s talk as motivational, it was. I wasn’t expecting it, but after listening to Mike share his experiences though images and videos, I was truly motivated. I was motivated to go fly and fly better, smarter. I was also motivated to continue to share my positive safety culture though my words and actions and to help to organically grow a positive safety culture across the aviation industry. Like, I said, I was really expecting to hear a great talk, see some cool pictures and videos and hopefully learn a few things. I literally left with a deep feeling of passion for aviation, greater than I have in quite some time and a drive to help spread a positive safety culture how ever I can!

If you ever have the chance to hear Mike talk or the opportunity to meet and speak with him, definitely find a way to make it happen. His passion for aviation is palpable and his wealth of knowledge is incredible. I will admit, I was very pleased to hear how Mike passed on flying his Cirrus up to the event and elected to drive instead with his wife and daughter. I thought this was very powerful, as he made the critical no-go decision, even on a day when he and his aircraft may have been able to actually do it; it just wasn’t a good idea. 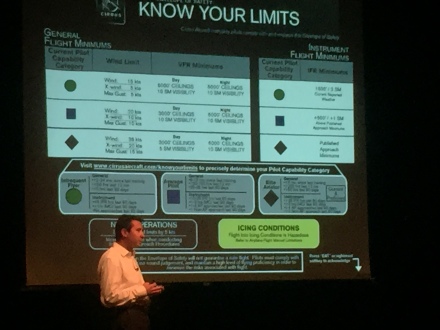 The day was highlighted with insightful seminars, a great group of vendors and of course an incredibly educational and motivational keynote opening, it was a great day for general aviation and one that I am glad that I was a part of. Mark your calendars now for next year- the New England Regional Aviation Safety Expo is a must-attend event for every pilot, every year!