The “$100 hamburger,” is a right of passage for every pilot. Flying to a (maybe not so) distant airport for breakfast, lunch or dinner is one of the most common uses of a general aviation airplane on a weekly basis. 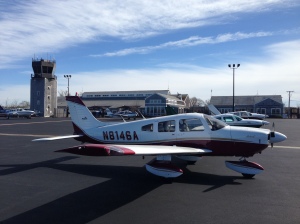 The building at the end of the row of aircraft (right) is the GA terminal. The restaurant is in the building to the left, the first-floor windows above the 3rd window of the Archer provide an excellent view while dining.

Each month I will be sharing a $100 Hamburger Tale! Flying for food isn’t just about a good meal, yes that is a must, but it’s really about the journey to get there! Sometimes we make long voyages for a good airport restaurant, other times we make a quick twenty (20) minute hop over to our favorite “more-local” airport diner.

My hope is that in the future some of YOU blog readers will contribute airport fly-in restaurant reviews too! I will be developing a review sheet with some key qualities that should be noted for a good review. You will be able to download the PDF to your phone or computer (and print if you’d like), then go and enjoy a great flight and excellent airport meal. After your adventure you will be able to share the experience with other pilots. Being based in Southeastern Massachusetts, my travels for airport food is limited primarily to New England and occasionally a little further away into other portions of the northeast United States. But with your contributions we’ll be able to have an eater-created catalog of airport restaurant options for pilots all over the United States, in addition to a collection of aviation adventure tales!

On a recent Saturday I met my good friend Jim at the Mansfield airport. Jim is a fellow (part time) flight instructor at KING Aviation-Mansfield, an HR professional during the day and adjunct college professor during the evening; in other words he is a busy guy! Over the past four years we’ve worked together to teach “Learn to Fly” ground schools at KING and from time to time we go flying too! I arrived at the airport without a plan, knowing that Jim would have something interesting in mind.

Jim was waiting for me at the airport and had a couple of good ideas in his back pocket. We discussed Sanford, Maine but that was a little far away considering our late start time. Another option was Windham, Connecticut. Windham is one of my personal favorites, with an aviation-themed diner located just a short walk from the FBO (Fixed Base Operation). Jim also suggested Martha’s Vineyard as a potential destination. He pointed out that on a windy day, the portion of the flight over water would give up a reprieve from the bumps for a while… This was something I had not considered, but I was sold. Moreover, I couldn’t remember the last time I had flown to the Vineyard, now that we had a plan it was time to roll!

The weather that day when we met at 11am was clear with ample blue sky, however it was very windy already, with a forecast for increasing gusty winds as the day progressed. We would be flying in Jim’s (very nice) Piper Archer and even with the forecast, I knew we would be more than capable of handling the crosswinds conditions created by the strong southwest winds forecast for the afternoon.

After checking weather and flight restriction (TFR) information with flight service, we pulled the Archer out of the hangar and gave it a thorough preflight. Often times when a last-minute flight is planned, the proper preflight procedures are skipped. This common misstep exposes pilots to a variety of risks such as penetrating flight restrictions, which could have been avoided if proper (not rushed) preflight actions were completed.

With so much snow over the previous couple of weeks we pulled the plane by hand to the end of the taxi-lane to ensure the wings would clear the hangar building on one side and the snow bank on the other. Once we cleared the snow banks we climbed in and started the aircraft up, following a run-up we launched for Martha’s Vineyard.

We climbed to 3,500 feet and cruised out in such a way to maintain power off gliding distance to land at all times. The views were incredible on the way out, especially over the Elizabeth Islands (pictured). The Elizabeth Islands stretch from Wood’s Hole to the southwest and lie between Buzzards Bay and the Vineyard Sound. 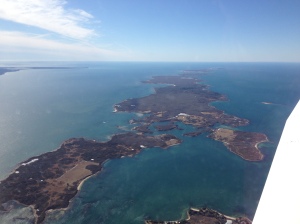 The Elizabeth Islands, looking southwest as we passed overhead Wood’s Hole at 3,500′ enroute to KMVY!

After initial contact the tower instructed us to report a 3-mile right base (over the sand pit) for Runway 24, however, before reaching that we were cleared for landing. Jim made a very nice landing, but it was easy to tell it was quite the effort due to the gusty winds on the island.

At that point we were probably the 5th or 6th general aviation aircraft on the ramp, likely all there for the restaurant, but maybe not… The airport restaurant, the Plane View sits overlooking the ramp and runways at KMVY, which serve an excellent backdrop for the aviation-themed airport restaurant. As a self-proclaimed aviation geek that enjoys eating, this is about as good as it gets!

Upon landing, asking to taxi to “restaurant parking,” will deliver you to the right of the base of the tower (your perspective taxiing in). You will then pass through the general aviation (GA) terminal, after exiting the GA terminal a short walk (~25 feet) down a covered walk and you will pass through another door into the main passenger terminal that serves the limited airline traffic to MVY. When you enter the terminal, the restaurant will be up a ramp to the left, seating is usually up to you, with a large number of tables over looking the ramp and runways,

Plane View has a menu full of intriguing breakfast and lunch options. On this particular day Jim opted for the Plane View Club, which as soon as it arrived, I was envious of. The sandwich was bountiful, in a word… I selected the Plane View burger with cheese and bacon, cooked medium. The burger with a side of fries was both delicious and filling. Cooked just as it was ordered and served promptly, the restaurant certainly caters to us pilots that don’t like to wait around too much longer than we need to! Plane view is open everyday 7am-3pm & 7am-7pm during the summertime (6/23 – 9/5).

After lunch and running into no fewer than a half dozen pilot friends from three different airports, Jim and I gave the Archer a walk around and check (a quick TFR check too) before climbing aboard and launching back towards Mansfield. We climbed to 4,500 feet on the way home and avoided a direct line return in favor of a less direct route to spend a little bit more time enjoying the view from almost a mile above Southeastern Massachusetts. 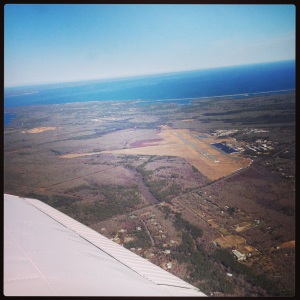 KMVY on departure to the north, climbing up to 4500′ preparing to take the “scenic” route back to 1B9.

Upon arriving back at Mansfield, the frequency was quiet as the now increased gusty crosswinds were keeping many leisurely flyers on the ground for the day. Jim worked for it, and ultimately made another good landing before taxiing to the fuel pumps. Eventually we returned to the hangar where the Archer got a quick wash as the snow melting on the tin roof of the hangar provided a shower as we pushed the plane under the roof-edge. Quickly the Archer was stowed, the doors were closed and locks were locked. Jim and I walked back to the FBO having enjoyed a filling lunch, great views and a fun aviation adventure.

If you fly anywhere in the northeast, I highly recommend making the journey out to KMVY and trying out the Plane View Restaurant. You won’t regret the meal and you will certainly enjoy the beautiful vistas along the coast as you approach the inner of the two Massachusetts’ islands!