There are a few things pilots use for bragging rights. Some of these are hours flown, aircraft flown, airports visited and long trips completed. Each pilot is proud of his/her own favorite adventure. For me it was winning a regional collegiate landing competition while I was a senior and the captain of my school’s flight team.

I always encourage pilots, both new and experienced, to try new adventures. Whether it is visiting a new airport, flying a new type of airport or taking a flight somewhere new. As humans we don’t like to be outside of our comfort zone. Flying in a new area takes you outside of your comfort zone and as a result sometimes it is avoided. My advice is to be confident in your skills and abilities and take steps to grow your comfort zone. By doing this, you will be opening new doors to great adventures.

My friend Mitch is a private pilot and college student that works as a line representative with me for KING Aviation-Mansfield. Currently he is working on building the required cross country time needed for an instrument rating. On Monday, January 13th, Mitch decided to turn his time building into an adventure by expanding his comfort zone. Thankfully, Mitch agreed to write up a story about his flight! Hopefully Mitch can inspire us all to expand our comfort zone and try new flying adventures! Chances are there are some really cool flying adventures within range from your home airport too.

When the winter months are upon us, general aviation slows down and there can be multiple weeks between flights. On the rare occasions, a fifty degree day, with few clouds in the sky will reward pilots of New England a bonus day to enjoy the sights and keep keen on their skills. I was one of the lucky pilots to enjoy this type of day, on a cross country flight from Mansfield, MA (1B9) to New York City. As an instrument student in a Part 61 program, accumulating fifty hours of cross country flying is required for the rating. I have been working hard to gain theses hours, whether it is just a flight to Chatham, or a 100+ nautical mile journey.

I had read stories about flying the Hudson, and getting a bird’s eye view of Central Park, the Freedom Tower and the Statue of Liberty. Why not take advantage of the opportunity many people do not have. My girlfriend and I decided to book an aircraft and see what the flight had to offer. I have dealt with headwinds before, but none like I encountered on the flight to the city. Flying at 6,500 feet, we were indicating 140 knots, with a ground speed of 93 knots! This did give us the opportunity to see many things along the way; Long Island Sound, Hartford, CT, Yale University, and Westchester Airport (HPN), where we made a quick stop. 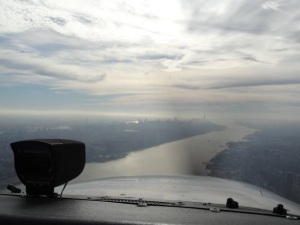 The New York City skyline, coming into view along the river!

A closer view of the skyline, note the Concorde below…

Upon takeoff out of HPN, New York Approach instructed us to fly towards the Tappan Zee Bridge and contact La Guardia tower once we passed over it. We were cleared to fly south down the Hudson, on the West side of the river. If you think of it as driving down the road, it makes sense; traffic down the river on the West, traffic up the river on the East. From La Guardia tower, they handed us off to Newark Tower, where they cleared the aircraft to 1,500 feet. We were instructed to remain clear of traffic and let them know when we were done circling the Statue of Liberty and Ellis Island. 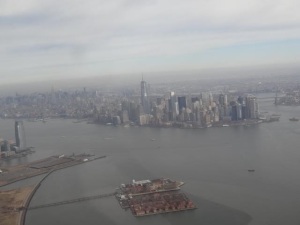 While turning this time…

New York, as many people are aware, is home to three major airports; La Guardia, JFK, and Newark, all within 30nm of each other. The jet traffic was beyond what I had ever imagined. Airlines flying in all different directions, hundreds of feet over us, to the left, and the right! Not to mention the sightseeing helicopters 200 feet below and passing us on the left. I imagined all of this to be stressful and a handful, but in reality, the controllers make it incredibly easy and accommodating. Yes, they do talk very fast, but they make it an enjoyable trip down the river, beside the biggest city in the United States! 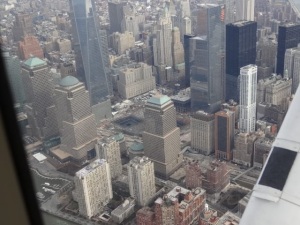 A perfect memorial from a bird’s-eye-view.

After 2 circles over Lady Liberty, we were easily cleared back North up the river. There is no other way that we could have been as close to the city and the buildings other than flying the Hudson! We passed the Freedom Tower, which stood higher than we were flying, saw the Twin Tower Memorial, Times Square lit up, and Central Park, with the Empire State Building looking over it. The flight back to Massachusetts was just as enjoyable, looking down on all the incredible mansions between White Plains, NY and Bridgeport, CT, and comparing New York City with New Haven, Hartford, Providence, and Boston. No comparison! Definitely a flight than every pilot should take. I am happy I got the opportunity, while using the incredible flight to help me towards my Instrument Rating.

Note from Matt: Thank you for the story & great pictures Mitch!

One thought on “Expand YOUR Flying Comfort Zone with Adventure Flights!”